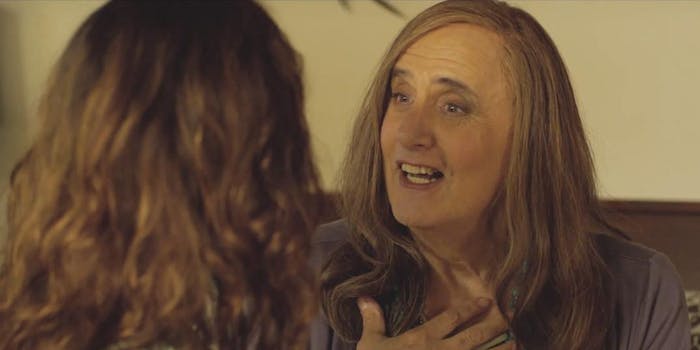 What’s missing from the Emmy nominations for Amazon’s ‘Transparent’

The pile of nominations is a huge win for writer/director Soloway and her entire cast and crew. It’s also a significant sign that the wider public is becoming more accepting of trans narratives at a moment when transgender rights are also finally entering the public consciousness. Disappointingly, the slate of Emmy noms also demonstrates that while trans narratives are award-worthy, transgender performers and directors are still struggling for that same recognition.

I don’t want to take anything any from Jill Soloway for her achievements on Transparent. The series is impressively written and directed, and Tambor gives as sensitive and powerful a portrayal of a late-transitioning trans woman as could ever be expected of a cisgender performer.

Soloway also put forth a huge effort to make sure a significant number of the crew on her series were transgender. Though the entire first season was penned by cisgender writers, Soloway also undertook a significant effort to bring in a trans woman writer for Season 2, eventually hiring performer Our Lady J.

As the first series featuring a main transgender character to garner significant praise from critics and viewers alike, it represents a huge step forward for the visibility of transgender identities. When Tambor and Soloway accepted Golden Globes for the series back in January, they both used that their moment on stage to call attention to dangers and hardships faced by the transgender community. We can only hope that they’ll have a similar opportunity in September.

Unfortunately, what we won’t be seeing during Emmy night is any actual transgender people. Though Laverne Cox made history last year when she earned a Best Supporting Actress nomination for her role on Orange Is the New Black, she wasn’t nominated this year. Trans actress Alexandra Billings was also passed over for her supporting work on Transparent.

Perhaps the biggest snub was the groundbreaking Netflix sci-fi series Sense8, which was written and directed by a trans woman, Lana Wachowski. The series also featured a transgender actress, Jamie Clayton, playing a lesbian trans woman. Clayton, Billings, and Cox all gave Emmy-worthy performances at least as memorable as those who received nominations, while the Wachowski’s Sense8 was worthy of technical nominations at the very least—the intricate storytelling and depth of character-building are deserving of recognition.

The Emmy nominations are reflective of a wider issue regarding trans people and transgender narratives in film and television, namely that it’s beginning to seem that critics (and the consuming public) have an appetite for stories about transgender people but are still struggling to accept actual transgender creators and performers. We still have cisgender actors being regularly cast to play trans roles in bigger budget films, like Eddie Redmayne in The Danish Girl and Elle Fanning in Three Generations.

Transparent certainly demonstrated that cis actors can play trans roles in a nuanced and sensitive way, but when we feature cis actors in trans narratives, we rob the trans community a chance for significant visibility. We only need to look at Laverne Cox’s appearance on Time’s 100 Most Influential People list to see how important and powerful that kind of visibility can be for our community.

Disappointingly, the slate of Emmy noms also demonstrates that while trans narratives are award-worthy, transgender performers and directors are still struggling for that same recognition.

As well, while Transparent’s success is a win for visibility, it’s only visibility for a very small part of the transgender community—and arguably the one that needs it the least. Aside from Cox’s role on OINTB, trans women of color are almost entirely absent from narrative media. Given that the trans women of color are at horrendously disproportionate risk for violence, poverty, and homelessness—while making up the bulk of the founders of what can be considered the modern LGBTQ rights movement—it seems remiss that that they should be so completely ignored by television and film.

As well, by featuring a transition story of a married late-transitioner, Transparent doesn’t exactly break new ground, as those narratives are perhaps the best-trod territory of nearly all trans-related media so far.

Wachowski’s Sense8 features a young, post-transition queer trans woman in a relationship with a cisgender woman of color, played by Freema Agyeman. One of the things most often missing from representations of trans women is the notion that they are both lovable and desirable as romantic partners, and non-exploitive representations of trans women’s sexuality are essentially unheard of. The combination of Wachowski’s writing and Clayton’s performance break significant ground in both respects and were certainly worthy of some award attention.

Despite that, yesterday was definitely a good day. Certainly, we should celebrate the bucket of Emmy nominations for Transparent as a major step forward for transgender people and transgender characters in television.

But let’s take it for what it is—a step in the right direction. Hopefully it will spur more studios to fund projects focusing on other kinds of trans narratives and featuring a wide diversity of transgender performers and perhaps encourage more series creators to include transgender characters in their series.

And with any luck, within a year or two, we’ll see an actual transgender person holding that gold statue.