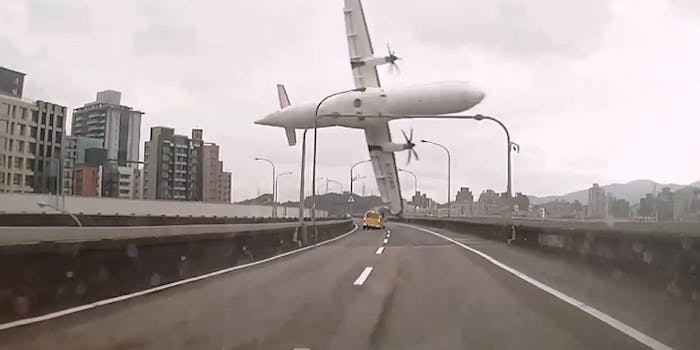 Drivers on the road captured the footage of the plane landing into the Keelung River.

At least 23 people have died after a TransAsia Airways plane crashed into the Keelung River in Taiwan earlier Wednesday.

Another 15 people were reportedly injured in the accident, and 20 are still missing.

Drivers on the road captured the moment the plane crashed into the river. Flying on its side, the aircraft hit a taxi and clipped the bridge with its wing before crashing into the river.

TVBS: Taxi cab was clipped by #GE235 as it descended into river in Taipei. #Taiwan #TransAsia pic.twitter.com/YuvtTl9xUP

The plane, TransAsia flight GE235, crashed just a few minutes after taking off from Songshan Airport, set to fly to the Kinmen islands. TransAsia Airways confirmed that there were 58 people on the plane—53 passengers (including 31 tourists from the Chinese city of Xiamen) and five crew members. The driver whose taxi was struck by the plane’s wing is still in the hospital with a head injury but is in stable condition, according to a head of the taxi company.

Rescue efforts are ongoing, with crews on the scene to remove passengers from the wreckage. The family members of the Taiwanese passengers have already been contacted, and authorities are in the process of contacting the relatives of the Chinese nationals.

#Update – Death toll has risen to 13 after #TransAsia Airways ATR 72 plane plunged into a river in Taiwan. pic.twitter.com/JhiCqGFGWa

Crews have already recovered the plane’s black boxes, which record flight data, and will hopefully be able to give more insight into what caused the plane to crash.

Wu Jun-Hong, the assistant director of Taipei’s fire department, is calling for the public works department to bring in heavy cranes to allow rescue crews to lift the plane.

“At the moment, we think a lot of the trapped people are in the head of the plane,” he said.

It’s the second plane crash in Taiwan for TransAsia in six months. Forty eight of the 58 passengers on a TransAsia flight back in July died after the plane tried to land on Penghu Island during typhoon conditions.

TransAsia chief Chen Xinde apologized in a news conference and stated that his planes had been “under thorough scrutiny” for months. The plane that crashed was an ATR 72-600, a relatively new model for TransAsia.

“Both our planes and our flight safety system are following strict regulations,” he told reporters, “so we want to know what caused the new plane model to crash, but I don’t don’t want to speculate.”

H/T The Verge | Screengrab via Unknown/Dashcam