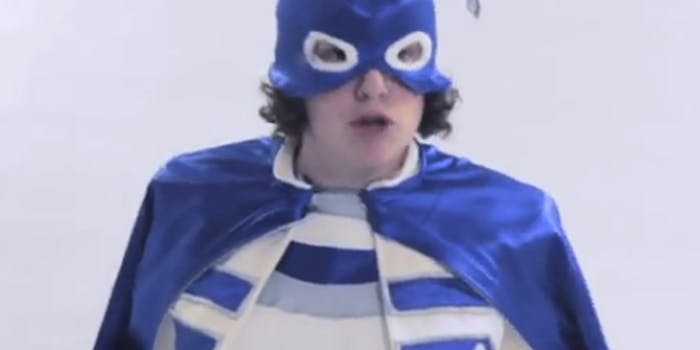 Tourette's syndrome is a serious condition. But Jessica Thom wants the world to know her verbal tics can be anything but.

There’s no question that Tourette’s syndrome could use a hero.

The condition, which causes Londoner Jessica Thom to say the word “biscuit” as many as 900 times an hour, can be socially awkward and frequently misunderstood.

In order to raise awareness about Tourette’s and dispell stereotypes, Thom transforms into a super hero alter-ego to share stories about her condition on her blog, Touretteshero.

“I’ve been writing this blog for over two years and in that time I’ve come to realise Tourettes isn’t my problem, it’s my power,” she wrote.

On Touretteshero, Thom writes anecdotes about living with Tourette’s, maintains a thorough FAQ (“Q: Are you possessed? A: Believe it or not, I’m asked this fairly regularly”), and keeps a full list of her verbal tics, which are frequently profane, bizarre, and surprisingly funny. Examples include “Aliens are landing on your forehead” and “Farting in heaven or farting in hell? Choose.”

Thom encourages people to laugh at her tics and even illustrate them. She collects the drawings in a gallery on the site. It’s a way to reclaim the humor of her condition from those who mock it.

“Tourettes isn’t funny but lots of tics are,” she wrote in her FAQ. “[The main aim of the project is] to celebrate and share the creativity and humour of Tourettes in an accessible way, with the widest possible audience.”

However, Thom told the Sun it wasn’t always easy to see the humor. The 31-year-old has experienced tics (both verbal and motor) since childhood. Verbal tics range from squeaks to profanities to the most inappropriate possible statement for a situation.

“For example … I sometimes catch myself shouting out my pin number when I’m using a cash machine,” Thom explained in her FAQ.

Thom wrote that holding in a tic can feel uncomfortable, like an itch or a sneeze, but acting on her motor tics can be downright painful. As she’s gotten older, they’ve have gotten more intense. She involuntarily bangs her chest hundreds of times a day, so she wears padded gloves to protect her knuckles.

“The sensations that trigger tics can be very uncomfortable—particularly if I try and hold them in,” she wrote in the FAQ. “And the consequences of ticcing can be painful too, like when I bang my chest or head butt a table.”

Thom’s outbursts don’t keep her from doing whatever she wants to do, with the exception of carrying breakable objects and knives. Along with Touretteshero’s support team of more than 30 people, Thom often dons her spandex uniform in order to run events that educate children (inlcuding those with Tourette’s) about living with the condition.

As this video of a recent Touretteshero event demonstrates, Thom’s tics don’t stifle her message of understanding and inclusion.

Thom wrote that since her blog was featured in the British media earlier this week, she’s been hit with more than 1 million visitors every day. She encourages new visitors to donate so she can continue to expand her mission beyond the blog.

“This website is only part of what Touretteshero does,” she wrote. “Our bigger mission is to put on innovative, creative and memorable events for children and young people with Tourette’s—these concentrate on playfulness and positivity rather than the problems associated with the condition.”