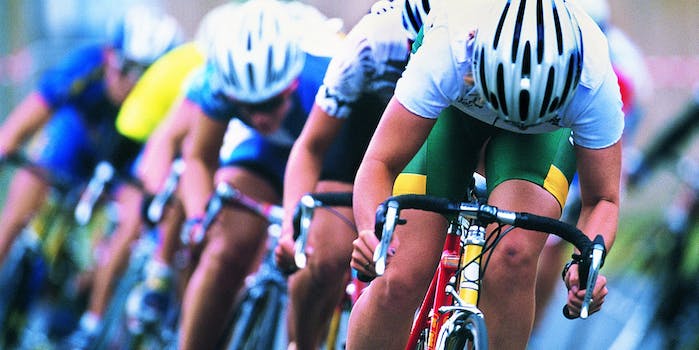 A prank reminds us it's still the early days of competition.

Riders and viewers of this year’s Tour de France received an unsolicited dick pic this weekend. Someone spray-painted a giant penis along the race course.

Riders are currently pushing through early stages of the competition that stretches over 2,000 miles around France. On Friday, a handful of viewers noticed the blatant vandalism along the road, and, naturally, were quite perplexed.

A large phallus appeared on screen briefly as riders crossed over the white paint, but the network quickly cut away.

Which one of you guys painted a penis on the Tour de France🙄 pic.twitter.com/Pzk37njWKU

I legit just saw all the bikers pass over a giant spray paint dick on the road in the Tour de France.

Watching the Tour de France, people drew a giant chalk dick on the road reminiscent of a JFH drawing. Very clear on the tv, made my day!

Now in its 103rd year, 198 male riders (22 teams with 9 riders each) will spend 21 days riding through France, beginning on its northwest coast and ending in Paris.

It’s not the first time someone has vandalized the course. For instance, in 2012, someone threw tacks on the road, causing a number of flat tires, crashes, and injuries. Compared to the tack incident, this year’s naughty graffiti is totally harmless, and if anything, makes the Tour de France much more watchable. Because riders, and viewers, still have a long way to go.