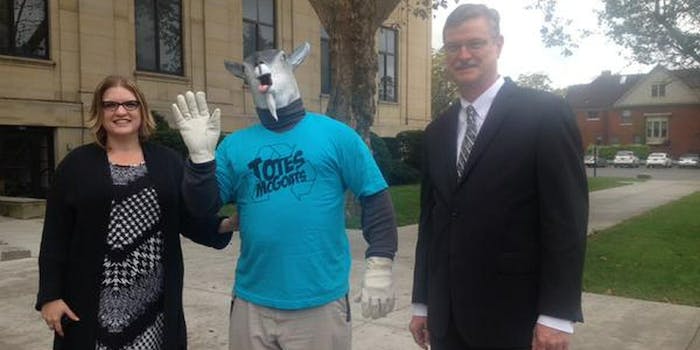 This horrifying goat-man mascot wants you to start recycling

A municipal meme is born.

A new recycling mascot in Niagara Falls, New York, appears custom-built to go viral for all the wrong reasons—which may, in the end, be a win.

Sure, young children have likely already been traumatized by Totes McGoats, a bizarre goat-man creature and proxy for the city’s Solid Waste Education & Enforcement Team. But as Time reports, participation in the recycling program he represents has risen from 4 to 23 percent in the last year, and with viral star power like this, those numbers will keep climbing.

“I guess you would say Totes is a cute animal mascot, kind of scary actually. But having an animal mascot we think is one of the ways that you can reach out to kids and get their attention,” said Niagara Falls Mayor Paul Dyster, according to TWC News Buffalo. (Hey, ridicule is a form of attention.)

McGoats is also getting lots of love on Twitter, where he has his very own account—so that the entire world can revel in his dated slang name, twisted rubber visage, dorky fashion sense, and general good attitude.

I’m going as Totes McGoats for Halloween this year.

Even more exciting than potentially becoming the meme solution to a municipal waste issue, it looks as if Totes McGoats will be joining the 2016 presidential ticket of a fellow upstate New Yorker named Shark Girl (a public statue in Buffalo by the artist Casey Riordan Millard).

In a world where regular humans can’t get anything done, it’s nice to know that these interspecies hybrids are here to help.