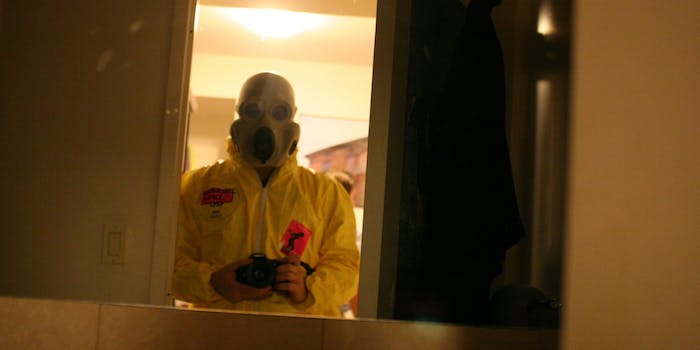 From shruggie poses to emoji masks.

As we reported last year, the Internet is a treasure trove of Halloween costume ideas. More and more, attending your local Halloween party dressed as a meme will net you extra popularity points and set you aside from the superheroes, Frozen characters, and others who obviously put little imagination into their outfits.

Here are several ideas for your upcoming celebration that will certainly have your fellow guests talking until next year, when the meme is rightfully forgotten. We’ll start with the most obvious.

The Guardians of the Galaxy

It goes without saying that Guardians of the Galaxy was one of the biggest movies of the year and a slam-dunk for Marvel. Full-scale costumes of Star Lord , Gamora , and even Groot already exist thanks to the film’s sensational success.

If you want to get creative, try combining elements like body paint, thrift store merchandise, and the like to mimic the appearance of one of the secondary characters, like Nebula, Yondu, or even Thanos.

The Ebola virus is all the rage—not only in the mainstream media, but also in the world of costuming. BrandsOnSale.com is sure to catch a lot of flak for its Ebola containment suit costumes (no bad publicity has yet to halt production or sale of the outfit). If you don the elaborate HAZMAT suit at your gathering, you can rest assured that you will be the most protected person at the party.

The Tumblr-themed Dashcon event this past summer may have been a huge bust, but it did manage to give birth to one of the year’s most widespread memes: the convention’s hilariously lonely ball pit. And if you lie down, maybe you can charge other partygoers $17,000 to jump on you. Yes, there is a real ball pit costume for adults.

Smartphone users everywhere were beyond happy when emoji keyboards became available this year—allowing them to express their thoughts using little more than cute icons like smiley faces and piles of dog crap. Now, thanks to Emojimasks.com, you can take that a step further with emoji masks, the first full facial covering that does not limit one’s ability to silently communicate.

Have you picked up your Jasmine Tridevil Halloween costume yet? pic.twitter.com/hrPXberC5N

Unlike DoubleDickDude, Jasmine Tridevil was a hoax. But the triple-breasted woman’s picture circulated just about every online community before being disproven. That didn’t stop the opportunistic folks at Halloweencostumes.com from quickly rushing a costume idea into production. The site shows a DIY method of turning already-existing fake breasts into the faux chest of Tridevil—which would actually compliment a DoubleDickDude quite nicely, come to think of it.

We’re not even sure if the year’s most renowned example of keyboard art even requires specific costume materials. Simply show up to your party in an eternal “shruggie” pose and leave the recuperation of your neck and arm muscles for Nov. 1.

Mario and Luigi are already popular costumes . But by adopting that unmistakable “death glare” that was popularized by the lesser of the two brothers in Mario Kart 8, you can gain some serious traction on your fellow costumed competition.

How to Make a Cheap Ice Bucket Challenge Costume for Halloween pic.twitter.com/8yBaM4EJpe

In the late summer, you couldn’t access Facebook without seeing several of your friends dousing themselves with buckets of freezing water in an effort to raise awareness for ALS. Now that fall is here, it’s far too chilly for encore performances (not to mention that your Halloween party host wouldn’t appreciate the wet carpet). Don’t despair, a complete ice bucket challenge costume, with thin plastic masquerading as water, is available from the fine, opportunistic folks at BrandsOnSale.com and can be purchased for $40

Photo via Fred Benenson/Flickr (CC BY 2.0)