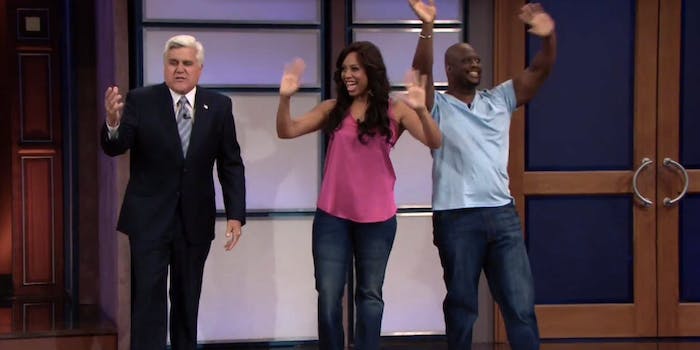 That video of a couple singing karaoke at a gas station, Jay Leno’s all-time greatest YouTube success, is totally fake.

The clip is of a well-established Tonight Show bit called Pumpcast News, in which a news anchor on a screen placed above a gas station pump starts interacting with the customera in front of him. In this one, he notices a man singing as he starts to pump, then asks him and his wife to karaoke. In the four days since the clip went up on YouTube, it’s gotten more than 7.5 million views.

The first clue that the video isn’t capturing a spontaneous moment of comedy at the one minute mark, when the newscaster announces “here’s Will!” without the singer giving his name.

In real life, the two, Will and Monifa Sims, are Chicago-trained actors. Will claimed in an interview with the Chicago Sun-Times that the only reason that fact wasn’t revealed in the Tonight Show segment (or the second one, in which the two were invited to Leno’s stage to reprise their songs), was because the show’s producers “didn’t want [people] to think we were actors and it was a plant.”

In the interview, he indicated that he hadn’t been in on the segment before it was filmed.

“You never, in a million years, think you’re going to pump gas and be on the Internet, let alone The Tonight Show,” he said.

However, as noticed by the Smoking Gun, Monifa has been highlighted in a different Pumpcast News segment on the show, possibly filmed the same day. Unnamed at the time, she’s challenged by the newscaster to run around the gas station in exchange for free gas.

“On both occasions, Monifa was in the same Chrysler Pacifica (she drove during the first taping, while her husband was at the wheel during the recent shoot).  Additionally, she is seen wearing identical workout pants in each segment,” the Smoking Gun reports.

“This almost seems like a plant,” Leno said when he brought them on his show, introducing Will as a bartender and Monifa as a fitness instructor. “We had no idea these people were coming.”