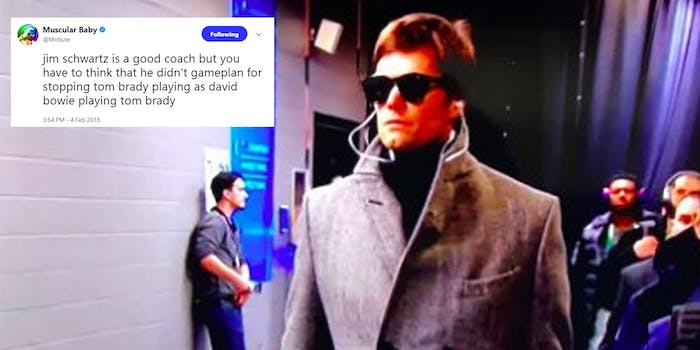 He didn't win the game, but Brady's trench coat won him some new fans.

Well, Super Bowl LII is over. The Eagles defeated the Patriots 41-33, and Philly has a lot of cleaning up to do today. But we still have some questions for Patriots quarterback Tom Brady. Is he moonlighting as a spy? Is he auditioning for a new band? Is he the key to an internet conspiracy theory?

Before the game on Sunday, Brady arrived at U.S. Bank Stadium in Minneapolis wearing a snazzy gray trench coat (collar popped!) over a black turtleneck. He completed the look with a pair of dark sunglasses and earphones. Video footage of Brady in his ensemble was soon turned into a meme.

The internet thought that Brady was dressed like a ventriloquist.

tom brady lookin like if the arcade fire added a fuckin ventriloquist dummy to their band pic.twitter.com/HcmtbjDpeE

jim schwartz is a good coach but you have to think that he didn't gameplan for stopping tom brady playing as david bowie playing tom brady pic.twitter.com/9nUlNq8nmg

Or a James Bond villain.

Tom Brady is either going to win the Super Bowl or die while trying to assassinate Jason Bourne in Zurich pic.twitter.com/t2oAysqk6v

There were several “kids in a trench coat” jokes.

People also guessed what Brady was listening to in his earphones. Interpol, maybe?

Tom Brady is definitely listening to TURN ON THE BRIGHT LIGHTS. pic.twitter.com/6Ds4ygZauW

But here is the most interesting theory: what if Tom Brady is also fake Melania Trump?

the fake melania was in fact tom brady in a wig: a conspiracy theory pic.twitter.com/uckyQXD8PW

There’s the trench coats, the sunglasses, and the stoic expressions. It all checks out!