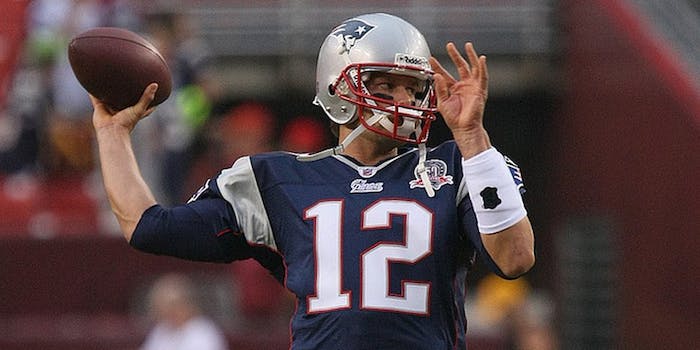 One lesson learned: Don't rip your quarterback in text messages.

Non-Patriots fans might not like New England quarterback Tom Brady. His team’s biggest rivals might strongly dislike him, as well. But they probably don’t hate him as much as one of the guys who was in charge of deflating Brady’s balls.

That would be Patriots locker room attendant Jim McNally.

According to the long-awaited Ted Wells report, which investigated the Patriots for the #DeflateGate scandal from last season in which the team was accused of improperly deflating footballs before games, Brady most likely conspired with equipment assistant John Jastremski and McNally to deflate footballs below the NFL‘s legal limit.

The official term used by the report’s author was that it “is more probable than not that [Brady] was at least generally aware of the inappropriate activities of McNally and Jastremski involving the release of air from Patriots game balls.”

In essence, the report concludes that Brady is probably a cheater.

But one of the most interesting passages in the 243-page report are the text messages that a distressed and seemingly fed up McNally sent to Jastremski. Because McNally didn’t mind blasting Brady.

For instance, here’s McNally on Oct. 17, 2014, after a Thursday night game in which Brady apparently was upset about the inflated state of his footballs. (FYI, the NFL requires for the balls to be inflated between 12.5 and 13.5 pounds per square inch, and the theory goes that balls deflated less than 12.5 are easier to throw). 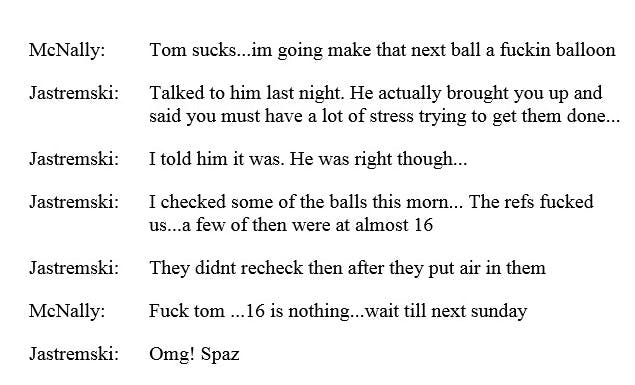 About a week later and a few days before the Patriots were to play the Chargers, here’s what McNally had to say (the needle refers to the process for which a ball is deflated, and McNally claims he will inflate the balls rather than deflate them (hence the watermelon quip); in the second message, McNally is referring to the new shoes he hopes Brady provides him for this favor)… And while McNally, who actually refers to himself as “the Deflator,” comes off rather horribly here, he’s probably not having as bad a day as Brady—whose legacy almost certainly will be tarnished by this scandal. It’s not like he won’t make the Hall of Fame some day, but people won’t likely forget this.

Don’t tell that to Brady’s dad, though.

“I don’t have any doubt about my son’s integrity—not one bit,” Tom Brady, Sr. told USA Today. “In this country, you’re innocent until proven guilty. It just seems Tommy is now guilty until proven innocent… This thing is so convoluted… They say that possibly—possibly—he was aware of this. The reality is if you can’t prove he did it, then he’s innocent, and lay off him. That’s the bottom line… This was Framegate right from the beginning.”