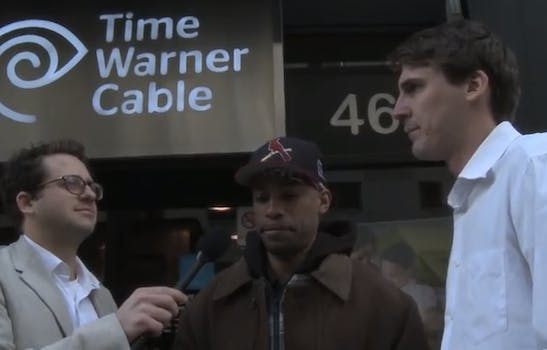 Inside Time Warner Cable’s campaign to silence a parody video

The cable company is essentially trying to remove the Good Liars satirical smear campaign from the Internet.

If you think Time Warner Cable’s customer service is bad, wait to you see how the far the company will go to shut down an online parody campaign.

Last week, Jason Selvig and Davram Stiefler, the two-man comedy group the Good Liars, released a modestly viral video in which the two pretend to be Time Warner employees, eagerly interviewing customers to hear how they could possible make their services worse.

It was painfully funny to the scores of people who shared the video, but TWC had the last laugh. On March 29, three days after the Good Liars posted the video, the entire YouTube channel the two created for it for it was deleted.

“They shut down the whole momentum of our video,” Stiefler said.

When the two logged on to the Gmail account created for the channel, the Liars were greeted with the message that the account had been deleted due to an impersonation complaint. (The mirror video above was re-uploaded to a replacement account March 29; it still has fewer than 1,500 views.)

“We’re a big company and so we’re not at all opposed to a good parody or satire,” Bobby Amirshahi, a TWC representative, told the Daily Dot. The two crossed the line, he said, by choosing “Glenn Britt,” the company’s CEO, as their username. The issue was “posting as though it was from the CEO, i.e. impersonation,” Amirshahi said. “Otherwise, no action would be taken.”

At no point in the actual clip do the two pretend to be anyone other than generic TWC customer service employees. YouTube’s community guidelines bans impersonating others, including “posing as that person in comments, emails or videos,” which is “considered harassment.”

Parodies are clearly allowed, though.

“No one in their right mind would think—I mean, we were getting kicked out of Time Warner in the video,” Stiefler told the Daily Dot. “Google was like, ‘We’ll do whatever Time Warner wants.'”

A similar thing had already happened on Twitter. On March 24, before shooting the video, Selvig noticed that the real TWC customer service Twitter account looks for people complaining about its service and tweets help at them. So he made an a parody account that night, sticking with the joke of wanting to make service worse.

Selvig found the account suspended that night. He made another two nights later: suspended. Another the day after that: suspended. A fourth, @twccarenyc, is for some reason still online. Here’s a typical exchange:

Twitter has a long history of deleting legitimate parodies for violation of the company’s Impersonation Policy, which requires each profile to clearly state “it is not affiliated with or connected to any similarly-named individuals.” Selvig’s accounts didn’t explicitly say “this is a parody account,” but its bio linked to the group’s parody page and it repeatedly tweeted the link to the comedy video.

Amirshahi made no bones about asking Twitter to suspend each of Selvig’s handles.

[T]he fake TWC Twitter accounts and web pages that impersonated our brand or CEO purposely misled and confused some customers who were trying to interact with us about their account.  Because social media has grown to become a critical customer care channel, we engaged Twitter for assistance and they quickly deactivated the fake handles due to the violation of their terms of service.

TWC made an bolder play after that, sending a legal complaint to GoDaddy.com, which the Good Liars used to register the site that serves as parody campaign’s hub, twcustomerservice.com.

“Since we were provided with proof the complainant owns a potentially applicable trademark, we have disclosed your identity,” GoDaddy wrote.

“I think Time Warner’s trying to get the website for themselves,” Selvig said. The two have yet to receive an actual legal notice from TWC.

The Good Liars do have an ace up its sleeve, though. The duo actually went through a similar round of parody and takedowns before.

In January, pretending to be a formerly gay couple, they convinced a Chick-fil-A employee they deserved free sandwiches for going straight. Though Chick-fil-A tried to sue for the website, chickfilafoundation.com, Brooklyn firm Lewis & Lin, LLC, successfully defended the Liars, pro bono.

TWC has yet to make another legal action. The Liars say that if TWC does sue, they’ll certainly consider asking for Lewis & Lin’s help again.