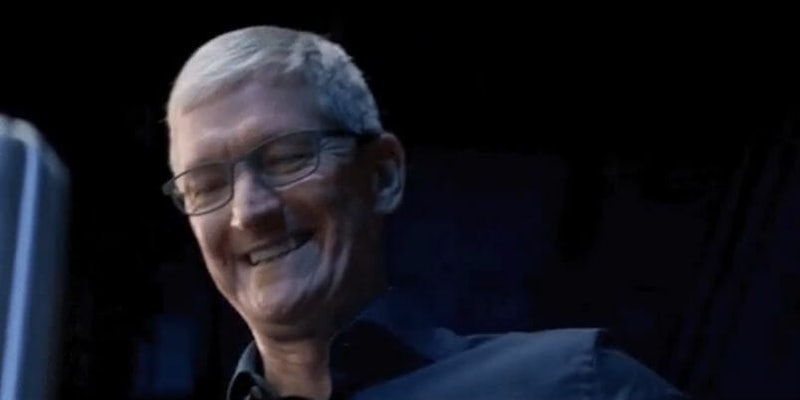 Tim Cook may be the face of one of the world’s biggest tech companies, but that doesn’t mean he isn’t above absolutely goofing everyone on Twitter.

Just a few minutes before Wednesday’s Apple Event, Apple CEO Tim Cook appeared to accidentally send a private Twitter message to the public feed, tweeting “No. Who can get it here quickly?”

It was unclear what Cook was talking about. Last-minute presentation materials, perhaps? No matter, though. Twitter was going to have a bit of fun laughing at the tech mogul.

Useful to remember that even the best companies are run by humans, we all scramble sometimes.

Tim Cook tweet (meant to be DM) ~8 minutes before the Apple Keynote kicks off: pic.twitter.com/NBsgBBoSNq

#Apple CEO Tim Cook just tweeted this out minutes before the #AppleEvent, then deleted it. But what IS "it"? Or is it just a text on the wrong app? pic.twitter.com/tG0ZXISIRC

Apple Event viewers were left to wonder once the CEO deleted the tweet. That is, until the conference’s introductory video started, showing an Apple employee running across the Apple campus (set to the bombastic Mission Impossible theme) while holding an important-looking metal briefcase. After a couple of stunts and laughs, and getting covered in grass, the employee makes it to the theater, only to find that instead of an epic new iPhone, the case contains Tim Cook’s slideshow clicker.

The #appleevent is starting. Tim Cook needs his clicker. pic.twitter.com/TznplV6Ugt

The internet, secure in its humility, had plenty of great responses to this likely troll job.

I was going to make a joke about the clicker but then I thought “nah.” Timmy boy played me. Ugh.

Cook is expected to announce new phones, watches, and ear pods during the press conference.