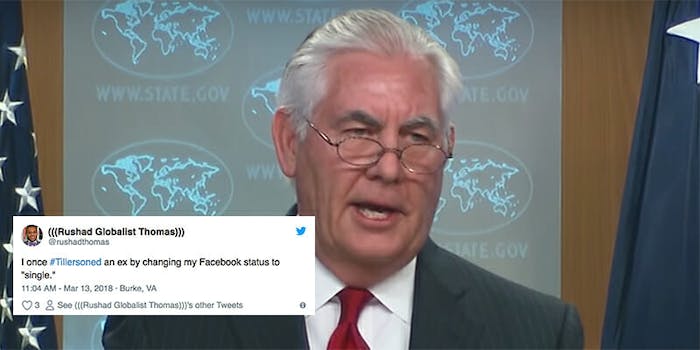 'I once #Tillersoned an ex by changing my Facebook status to "single."'

Rex Tillerson got fired Tuesday, and it turns out he learned of his firing via tweet from President Donald Trump—because of course he did.

I am told Tillerson found out he was fired from Trump’s tweet.
This morning. Knew there was tension but was not going to quit and did not know he was fired

We got off the plane with Tillerson less than four hours ago. There was zero indication on flight home that this was imminent.

As a result, the internet has a new verb for dumping someone unaware via social media: Tillersoned. Think of it as a step up from ghosting, since at least you announced the breakup at all.

CONFESSION: I once Tillerson-ed an ex by breaking up with him via changing my relationship status to “Single” on Facebook.

The day before Valentine’s day.

Not my best moment.

People are pouring in with tweets of their own accounts of Tillersoning. Some are more savage than others.

I once #Tillersoned an ex by changing my Facebook status to "single."

I got Tillersoned sophomore year of high school. She changed her status to single but also got into a public relationship with someone else before I even made it back from debate practice lmao https://t.co/oDzfkBN3lJ

I got #Tillersoned when my bf made out with another girl at a bar. Where I worked. While I was on shift. At one of my tables.

There are also those moral souls who have not Tillersoned a romantic partner (yet).

Going to sit confidently on my high horse and say that I am pretty sure I have never Tillersoned anyone. I'm still probably a terrible person, but haven't hit that hallmark yet.

But whether you’ve been on the giving or receiving end of a Tillerson-style dump, rest easy knowing you’re not alone. It’s just another phase in the evolution of heartbreak.