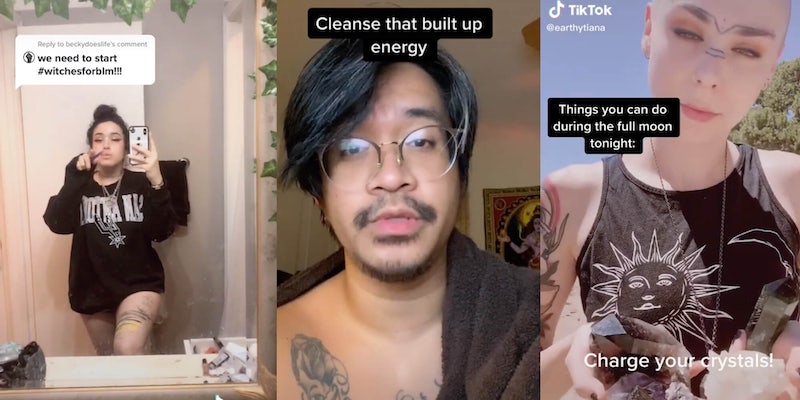 With the help of a full moon, TikTok witches are using their powers to protect protesters against police brutality.

Utilizing the #witchesforblm hashtag, practicing witches are teaching one another how to cast spells, draw sigils, and manifest intentions. Videos under the hashtag have been viewed more than 12 million times.

According to Mashable, the movement started with TikTok user, @beckydoeslife. She commented on a post in response to a TikTok by @venxm.exe in which the witch filmed herself casting a protection spell for protesters across the nation rallying against the police killing of George Floyd and similar acts of police brutality.

“The witches or practitioners are using [their] power to help aid in healing and protecting people of color, or anyone affected,” TikTok user @geminimoon01, a practicing witch, told Refinery29. “Some witches are also taking the advantage of this great energy to hex the oppressors.”

The witches hope to protect protesters and hex law enforcement, who have used escalating force on demonstrators as of late.

In some videos, TikTok users act out what they predict will happen to cops after the witches cast their spells.

And in another video for beginner witches, user @jes.tkidding_ suggests a simple hex: On paper, write down the names of officers and then use a black candle to burn the paper all the way through.

The movement doesn’t stop with witchcraft, however. Users are also encouraging witches to sign petitions, donate to the Black Lives Matter movement, and attend protests.

“Some people choose to believe in our craft and some don’t,” @geminimoon01 told Refinery29. “At the end of the day we are all human and we just want to survive in this world.”