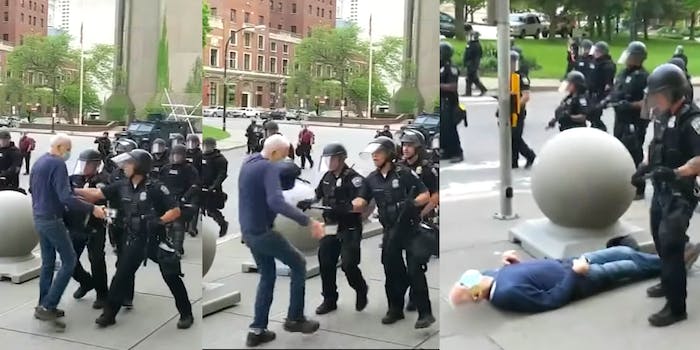 Two cops were suspended after they shoved an elderly man and left him bleeding on the ground.

Update 4:07pm CT, June 6: The two police officers who have been identified as Robert McCabe and Aaron Torgalski were each charged with one count of second-degree assault, a felony, on Saturday. They both pleaded not guilty, according to NBC News.

After a viral video showed two Buffalo, New York police officers pushing an unarmed elderly man to the ground, two cops were suspended without pay. In response, all 57 of the officers on the police department’s Emergency Response Team have resigned in support of the two suspended officers.

In the video, the elderly man, who was later identified as 75-year-old Martin Gugino, approaches the crowd of officers donning riot gear. As the legion moves closer, they yell “move back” and “push him back” multiple times. Meanwhile, the man seemingly tries to reason with the officers. Two officers then shove Gugino, and his head immediately hits the pavement, leaving him bleeding on the ground.

An officer briefly stops next to Gugino, who is unconscious and not moving at all, to check on him. Another officer then pushes the first cop to keep him moving. The video ends with another officer asking everyone to move as the person recording says, “You better get an ambulance for him.”

The video was captured by WBFO, an NPR affiliate radio station, and has amassed over 71 million views.

Despite the video, Buffalo Police Department spokesperson claimed that Gugino “tripped and fell,” and this was met with a firestorm of angry tweets.

“He didn’t trip and fall, an officer pushed him and then the rest of them stepped over his body to neutralize the threat of a guy with a cardboard sign,” Twitter user @kathbarbadoro wrote.

The Erie County District Attorney’s Office announced in a statement on Friday that they would be investigating the incident and that Gugino was not able to speak with the investigators. A hospital spokesperson at the Erie County Medical Center said he was in serious but stable condition.