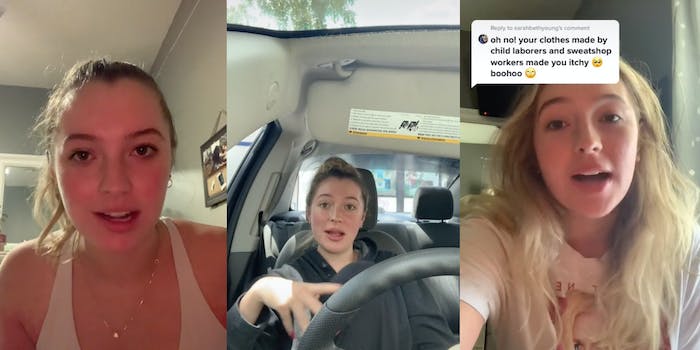 Some commenters shared their own rash experiences with the fast fashion brand.

A TikToker put popular fast fashion brand Shein on blast after its clothes reportedly gave her a full-body rash.

In a series of videos, user Britney Bowdoin chronicles her experience. A day after trying on a clothing haul, Bowdoin said she noticed a massive rash on her thighs and upper body. She initially thought it was ringworm, but said her doctor clarified it was a severe case of dermatitis.

Bowdoin then showcases one half of her upper body, where a red rash extends from her armpit and shoulder down to her stomach.

“It’s spreading in little pimples,” she said. “One of the shirts gave me an allergic reaction.”

Bowdoin admitted she didn’t wash the clothes before trying them on because she wanted to be able to return them. But she warned fellow shoppers to not do the same.

“Please start washing your clothes from Shein,” she said in a second TikTok. “I know it sucks because you can’t return it. But trust me, it’s worth it instead of getting this shit.”

In the comments, a few people commented that they, too, had bad reactions to Shein’s clothing.

“Wow..this happened to me [too] I thought I had ringworm on my knees but it was exactly that from their clothes,” one woman wrote.

“Why are people still ordering from there? I don’t get it,” another said.

Other commenters weren’t as sympathetic to Bowdoin’s experience.

In a final video, Bowdoin explains that she knows “Shein is unethical”—but ordered there anyways because she believes other name-brand stores are “just as bad.” Plus, Shein’s prices are affordable, she adds.

“I’m not saying it’s good to support them but when someone is trying to find cheaper clothing, it’s hard not to resort back to these places,” she said. “Please, just be careful with your clothes.”

The Daily Dot reached out to Shein for comment.