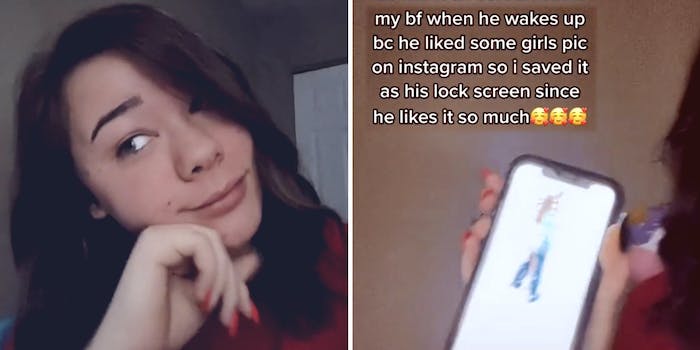 TikToker makes boyfriend’s lock screen a picture of a girl he liked on IG in viral TikTok, sparking debate (updated)

'I saved it as his lock screen since he likes it so much.'

TikToker Jillian Stevens (@jillianstevensss) has been forced to defend her boyfriend after her viral TikTok caused people to pick apart her relationship.

The TikTok, which was seven seconds long, was posted on Jan.17 and has garnered more than 300,000 views.

“My bf when he wakes up bc he liked some girls pic on Instagram so I saved it as his lock screen since he likes it so much,” the video’s overlay text reads. In it, Stevens lip-syncs to the viral sound: “Oh my god, she’s insane,” sampled from Taylor Swift’s “I Bet You Think About Me.”

Many commenters are women agreeing with Stevens’ response to her boyfriend’s alleged actions. Many said they would even try the “petty” move on their own boyfriends.

“You’re giving me ideas,” one commented, while another said they will “add it to my to-do list.”

While the TikToker clarified in the pinned comment that the video is a joke and they’re very much in love, it did not stop criticism from bubbling up around the couple.

“People can’t take jokes on this app,” she replied to a comment. “Supposedly I’m supposed to break up my happy healthy relationship bc he liked a post on Instagram.”

A few other comments called her toxic and the move unhealthy, with one commenting an actual red flag emoji.

In a follow-up video, Stevens replied to a comment that said: “Bestie no man that puts his snap in his bio and is liking other girls photos is loyal.” The new TikTok shows her going through her boyfriend’s phone and scrolling through all his social media. In an effort to prove her boyfriend’s fidelity, she shows his direct messages, Instagram likes, and TikTok likes—all free of women.

“Pipe down,” her caption reads. “I can ask for his phone at any given moment & he just hands me it…he’s loyal sis.”

Update Jan 27. 12:45pm CT: When reached for comment, Stevens told the Daily Dot she didn’t expect for her video to receive the response that it did and reiterated “it was just a joke.” “I thought our friends would get a laugh out of it!” she said.

She said that none of the negative comments bothered her because her “boyfriend is a loyal person & wouldn’t ever do anything to jeopardize our relationship.”

She added that her boyfriend thought her changing his lock screen was “funny,” and he has since “changed it back to a picture of” Stevens.

And “he sure hasn’t like anything since,” she confirmed.