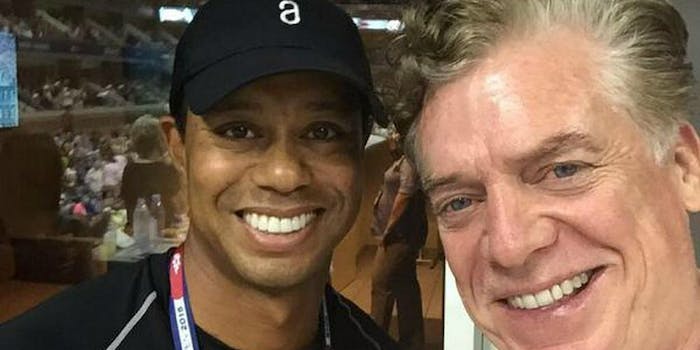 Tiger Woods has met his match.

Just behind not talking during somebody’s backswing, the most famous of these customs holds that when one golfing legend who has metaphorically lost his way on the golf course meets up with a golfing legend whose memories cannot ever be erased from the most glorious of golf movies, they must pose for a photo. Preferably, a selfie.

For instance, these two men.

The resulting (and mandatory) photo:

Two golf legends catching up with each other at the U.S. Open the other day @TigerWoods pic.twitter.com/kU8AFfnLPb

Shooter McGavin, of course, is not a real man. That’s character actor Christopher McDonald, who was lucky enough to play the villain in Happy Gilmore, one of Adam Sandler’s only good movies, and will forever be recognized on the street as such.

The dude on the left is Tiger Woods, once the best golfer in the word—and one of the best in history—but who now is a less than average player on the PGA Tour. He must have been thrilled to meet Shooter McGavin, who surely had some tips about always eating a nutritious breakfast.