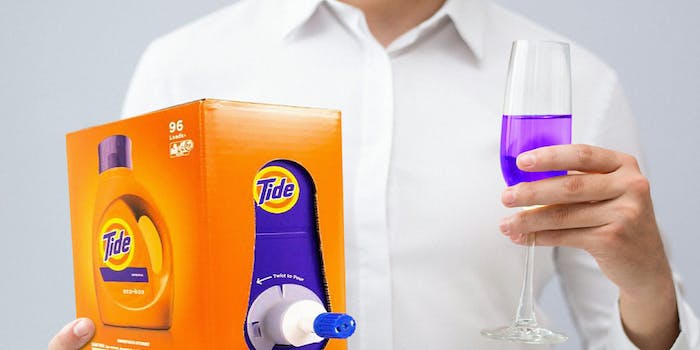 Everyone thinks the boxed Tide looks like boxed wine

Remember Tide Pods, the multi-colored laundry detergent packets that look like candy? The memes about eating—or wanting to eat— Tide Pods exploded on the internet in January (although it feels like years ago), but it seems that Procter & Gamble, the company that owns Tide, has not learned its lesson.

Over the weekend, news broke that Procter & Gamble was launching Tide laundry detergent in a shoe box with a twist-to-open spout. The eco-friendly design is intended to reduce the amount of cardboard and other materials when shipping the detergent to customers. But, take a look at the box. What do you see?

Why Procter & Gamble will start delivering Tide in a shoe box https://t.co/N3qkRay8MD pic.twitter.com/8LZrDrLK1z

If your first thought was “boxed wine,” you’re not alone. Jokes about the Tide box looking like delicious boxed wine took over Twitter on Monday.

Nice to see Tide coming out with some Boxed wine to go with their Pod hors d'oeuvres #TidePods pic.twitter.com/W0dqD1aXt5

I've never wanted to do anything as much as I want to fucking chug detergent out of this Franzia box https://t.co/LJiQre3Wep

When you're older and too classy to eat Tide pods… you can drink Tide like a fine wine from a box. pic.twitter.com/mptWIs9jl5

The jokes about the shoe box Tide are good, but it’s important to remember that some teens actually tried ingesting Tide Pods as part of a viral challenge—and ended up in the hospital. It’s strange that Procter & Gamble couldn’t see how it actually just created a boxed forbidden beverage. Now, people will want to try drinking it. But, please, don’t! Trader Joe’s boxed wine is definitely tastier. I promise.