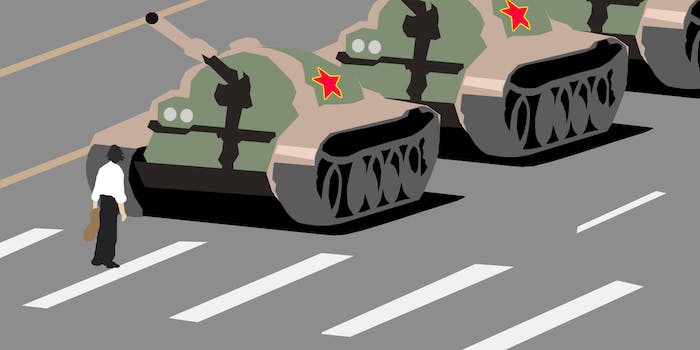 On the eve of China's most sensitive event, it appears that China's censors are relaxing their trigger fingers. But appearances are deceiving.

Searches for the “June 4 incident,” a reference to the 1989 Tiananmen Square Massacre, are usually blocked on China’s largest social network. Now, four days before its anniversary, Tiananmen is suddenly popping up in search results.

The move hardly represents a lifting of the censorship veil, however. Instead, it’s a shift towards a far more devious method of censoring one of China’s most sensitive political topics.

Previously, Sina Weibo was kind enough to let you know it was blocking you from searching about Tiananmen. A search for the “June 4 Incident” would return a message: “According to relevant laws, regulations and policies, search results for ‘June 4 Incident’ can not be displayed.” That’s boilerplate text the network uses for any blocked search term.

This morning, however, searches for the term returned real posts from real Sina Weibo users. It looks like it’s working. It’s not.  What you’re seeing, instead, is a filtered selection of stories, all posted up to an hour before your search, as detailed at the blog Greatfire.org.

This is “censorship at its worst,” Greatfire.org wrote:

Users suspect their search term might get blocked before they search but instead of a censorship notice they are led to believe that what they are searching for is not sensitive.

So which discussions about Tiananmen does Sina deem safe for the general population? Many of the results are about another protest, this one from 1976, when Beijing residents flooded the Tiananmen area to protest the fact they were prohibited from publicly mourning Zhou Enlai, the country’s beloved premiere and Mao Zedong’s right hand man for decades. As a Mao-era event, which happened years before China opened to the world, the 1976 protests bear none of the political baggage that 1989’s events hold.

For a more detailed rundown of how Sina is actively censoring the Tiananmen Square Massacre, check out the Greatfire.org post.