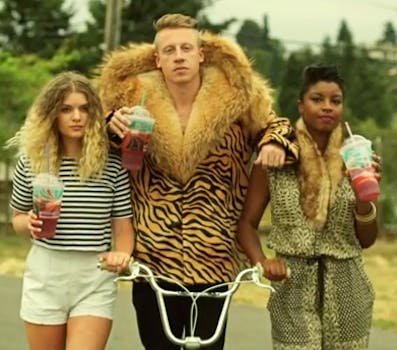 A woman in Colorado was arrested after strangling her boyfriend because he would not stop singing Macklemore's "Thrift Shop."

A mega-popular YouTube hit can provoke change and ignite a new understanding about the way in which our world works during these troubled modern times. It can serve as a soundtrack during the good times and a safety valve during the bad.

It can also inspire a 23-year-old woman to beat up her boyfriend because he won’t stop singing the damn song and she asked him repeatedly to shut the hell up.

That’s exactly what went down in Boulder County, Colo., Saturday night when Samantha Malson was arrested for choking her boyfriend after he’d refused to stop singing Macklemore & Ryan Lewis’s viral joke-rap hit “Thrift Shop,” which has more than 230 million views on YouTube, even though it was his 26th birthday and she’d asked him to stop “25 times.”

The two had apparently been fighting all night, according to police reports, about the fact that the boyfriend, Lars Hansen, had consumed all of the alcohol in the house.

Malson left in a fit of drunken anger. When she came back, she started listening to “Thrift Shop” but stopped after one spin. Hansen, however, wasn’t done appreciating the wildly popular track—its high-speed lyrical delivery and flashy, sporadic horn sequences—and began to sing (what we can only assume was the cheese-balled “I’m gonna pop some tags” hook) while lying down on his couch.

Malson asked him to stop singing “25 times” but Hansen wouldn’t give in. When she realized that her pleas were going unheard, she tried the only other viable option: strangulation for the sake of intimidation.

She was arrested shortly thereafter for Domestic Violence and Harassment and offered a bond of $3,000. According to police reports, Hansen’s neck “was red on both sides; however, his face was flushed and it was difficult to tell if the redness was from alcohol intoxication or from Malson grabbing his neck.”

This is hardly the first time that a song made popular on YouTube has gotten somebody in trouble. Countless folks were suspended from school or fired from their jobs this spring for engaging in various “Harlem Shake” reenactments. In December, a man in England died of acute heart failure after dancing at a wedding to some song called “Gangnam Style.”

Anyway, the fact that this song has given birth to this crazy news story does nothing to change the fact that “Thrift Shop” is a played-out song about buying cheap clothing and it’s helping to water down American rap.