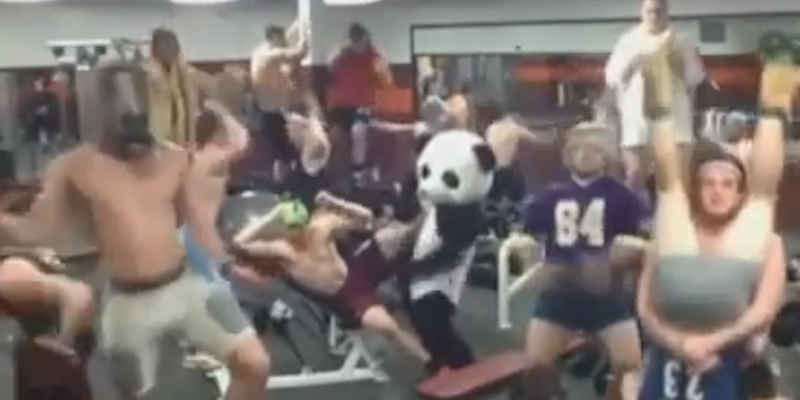 Members of the Susquehanna University men's hockey team are the latest "Harlem Shakers" to be sanctioned by a school over an inapproriate video.

Alright everybody, raise you hand high if you’ve never been arrested, suspended, or otherwise scolded for taking part in a filmed episode or rendition of Baauer’s “Harlem Shake.”

Members of the Susquehanna University men’s hockey team, it’s time to put your hands down.

11 Susquehanna University Crusaders were suspended from their team indefinitely this week after members of the team posted a version of the massively popular “Harlem Shake” onto YouTube.

School administrators say that they suspended the students because the video, which has since been removed—though a mirror clip is still widely available—found several students pantomiming sex acts on one another.

“Susquehanna University promotes a culture of respect and personal responsibility,” read a school statement addressing the matter. “Participation in intercollegiate athletics is a great privilege. The student-athlete handbook calls upon student-athletes to be exemplary role models by demonstrating respect for others and acting in a first-class manner.

“We are disappointed by this behavior and the way in which these student-athletes represented our teams and the university. We hope that they learn from this experience, and that they will earn their way back to representing Susquehanna as members of their teams.”

The hockey players’ suspension is the third school-related sanction to come down on a group of Harlem Shakers this week.

On Monday, Nyack/Tappan Zee High School’s hockey team was forced to forfeit a New York state playoff game after their rendition of the dumb dance emerged online. Two days later, 13 students at Pennsylvania’s Brownsville Area High School were suspended for two days after they too couldn’t make a “Harlem Shake” video without getting sexually grotesque and inappropriate.