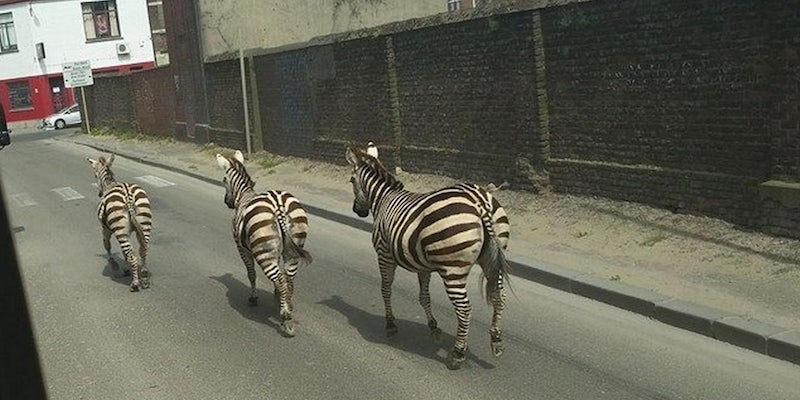 It's a real-life version of 'Jumanji.'

A few months ago, the world watched with bated breath as a pair of renegade llamas roamed the streets of Arizona. But these Belgian zebras are giving those llamas a run for their money.

A trio of touring equids was seen casually strolling the streets of Vilvoorde in Belgium on Friday, local news outlet HLN reports. The animals were first spotted at the Van Praet Tunnel, after escaping from what local authorities believe to be a local ranch.

It isn’t everyday that you chance upon a zeal of zebras on your way to work, so Sam Lesage took a few photos of the creatures and posted them on Facebook.

Translation: “Zebra in my little garden.”

“Here are the 3 Snapchat zebras.”

Two of the zebras were captured on foot at the Hellestraat by the police, along with veterinarians armed with tranquilizer guns. The third zebra was caught near the vehicle inspection center.

Although zebras have been known to act aggressive, thankfully, there were no reports of injuries caused by the animals. But there is this incredible footage of the zebras running through the streets of Belgium like it ain’t no thing, so we can relive their glorious escape over and over again.