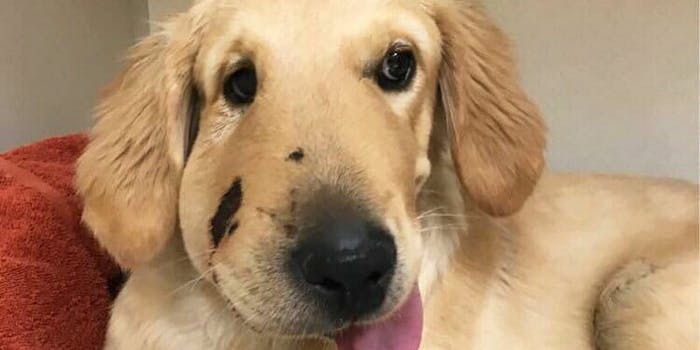 Give him all of the treats!

The latest inspirational doggo story comes to us from a six-month-old golden retriever named “Todd,” who deserves all of the treats after an act of heroism that saved his human from a potentially deadly encounter. Paula Godwin was out hiking with her two dogs near her home in Anthem, Arizona, last Friday when she accidentally nearly stepped on a rattlesnake. She would have almost certainly got bitten, however, Todd jumped between her leg and the snake just before it struck, potentially saving her life.

So this morning was up bright and early to go on a hike on 7 th street carefree . It was a beautiful morning but as we…

Luckily Godwin was able to take Todd right to a local animal hospital where he was treated for his bite and is expected to make a full recovery. In an update on Sunday, Godwin wrote that Todd was already healing and thanked people for their support. “Your kindness and support is truly a blessing,” she wrote, accompanied by a photo of herself nuzzling Todd.

Not surprisingly, Todd’s heroic act went viral because the internet loves nothing else if not tales of very good boys, and he was even rated the fifth ever 15/10 on WeRateDogs.

This is Todd. He saved his human from a rattlesnake yesterday. A true h*ckin hero. He’s expected to make a full recovery and has been rewarded our fifth ever 15/10 pic.twitter.com/TsS6isI0Ew

Others likewise chimed in to express their admiration for Todd’s heroism:

Tonight I saw that picture of the dog who got bit by the rattlesnake and his face was all swollen and I actually cried for like five minutes and I started to think “dear god what’s wrong with me” and then I remembered “oh yeah I’m on my period.”

Plus that pic is really sad c’mon

Dogs are amazing, beautiful creatures. They will take a bullet for you (or a rattlesnake bite). How many of us would do the same for them? I love dogs. https://t.co/Sd0konS0s4

TODD THE HEROIC DOG PROVES THAT YOUR DOGS ARE THE MOST LOYAL PROTECTORS YOU HAVE ! ETERNAL LOVE FOR THEIR OWNERS!
Heroic dog is bit in the face by rattlesnake while protecting owner   https://t.co/ueiGzAVtvd via @MailOnline

And of course, he made the local news:

WATCH: Guess who we met today?! This amazing little guy Todd. His owner, Paula, telling us about her little hero. And he is doing SO MUCH better after that rattlesnake bite. He says "Thanksss furrr the prayers." @dog_feelings @dog_rates #Fox10Phoenix pic.twitter.com/lslNCkmpvl

The saying goes that cats have nine lives, but this very good boy must also have a few under his belt. Long live Todd!