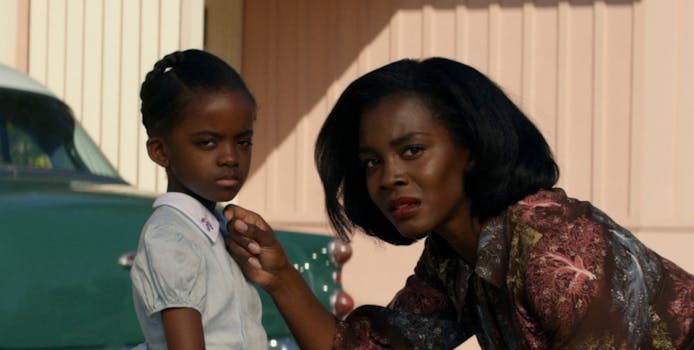 Review: ‘Them’ chooses aesthetic and dread over a clear narrative

'Them' is the latest series that gets lost in its plot.

Who is Them for? The new Amazon horror series, executive produced by Lena Waithe and created by Little Marvin, doesn’t really seem sure.

The 10-episode series chronicles 10 days in the life of the Emory family after arriving in East Compton, California, 1953, where they’re gawked at and eventually harassed by their white neighbors. Henry (Ashley Thomas), a veteran with PTSD, is the only Black engineer at his job and endures the indignity of being a curiosity. His wife Lucky (Deborah Ayorinde) is trying not to be viewed as unstable by the neighbors, though a traumatic event is haunting her. Teenager Ruby (Shahadi Wright Joseph) is dealing with her own identity issues, and young Gracie (Melody Hurd) is seeing things in her room.

Them is horror based in history, a rendering of a specific time—when Black families were migrating away from the South in search of a better life, and East Compton was majority white. Alison Pill goes all in playing busybody Betty, leader of the harassment campaign against the Emorys, and her speech at a homeowner’s association meeting spells out the still-held view that whites built the country and are entitled to it. But at times, her and the other neighbors’ behavior is so cartoonishly evil it deflates the surrounding drama or tension. And there is a lot of tension in Them.

It goes a little too far into Betty’s story, in an attempt to give some vague justification for her unfettered racism. Meanwhile, a flashback episode shows the source of Lucky’s trauma in prolonged, unflinching detail, and gives some credence to last month’s criticism that the series leans on the tendency to turn Black trauma into entertainment.

When the trailer was released, many people accused Them of ripping off Jordan Peele’s style: There are some similar aesthetic choices as 2019’s Us, and the same song from that film’s ending—Millie Riperton’s “Les Fleurs”—is used in Them. But whereas Peele typically has some bigger message or theme that he’s driving home, Them gets lost in its heavy-handed supernatural elements. More ominous is a scene mid-series that gets into how lenders swindled Black homeowners during the Great Migration and the “covenant” that was supposed to keep Black families out of the suburbs.

Ayorinde and Thomas especially are great here, and Them has promising moments, but getting all the way to the end isn’t pleasant.