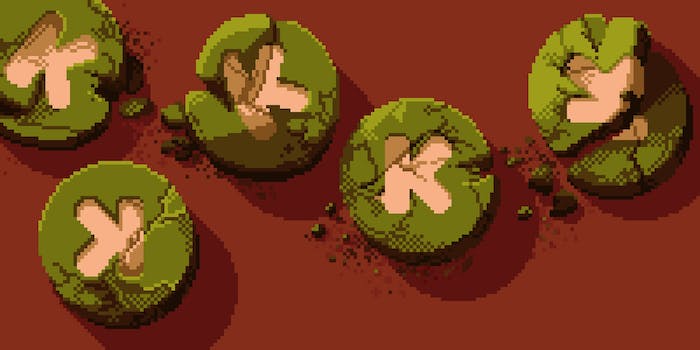 The 8 worst Kickstarters of all time

They should pay you for even looking at these.

I don’t think there is a site capable of more good—and, on the flip side, greater evil—than Kickstarter.

On one hand, it empowers creatives to do exactly what they want to do and deliver to a self-selecting group of people who’ve waited years, or decades, for, like, a new Tim Schafer adventure game. That’s pretty great!

But it can also give rise to some truly horrible ideas—or worse, good ideas couched in a Ponzi scheme. Turns out when you give someone money to create a product while asking for no equity in return, you can get totally boned when they disappear! Oh crowdfunding, you’re so cool when humans are generous and passionate and so awful when they’re not.

We’re not here to talk about those cases, though, because it’s hard to laugh at broken dreams. Today, we’re talking about Kickstarters (and GoFundMes, and IndieGoGos, etc.) that were doomed from the start. The campaigns that focus on a product or service that’s so vapid, so desperate, and so self-involved it makes you angry that they even worked up the nerve to ask for investment. Ready? OK, take a deep breath.

1) Finally, you can prove to your friends that you’re sexually active! 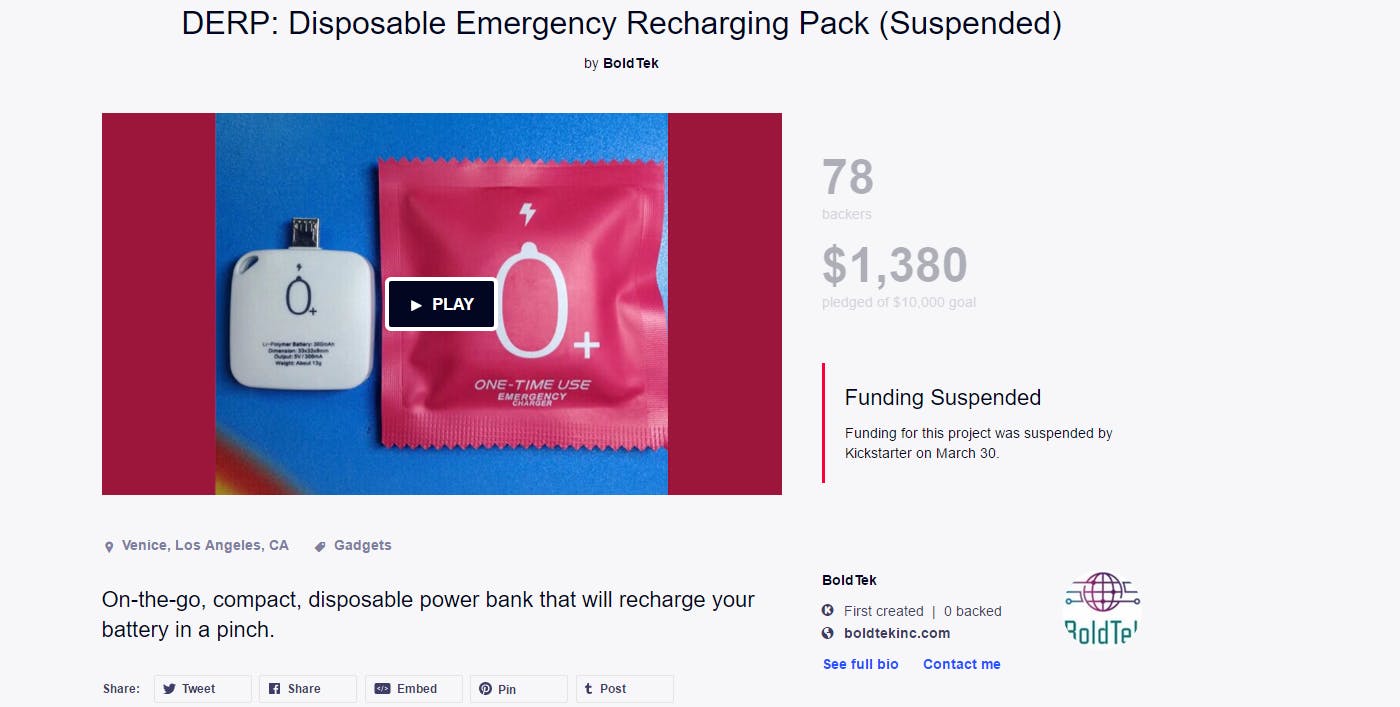 First things first, they called the fucking thing “DERP.” I don’t know if it was supposed to be edgy or not, but please, please, please read the internet before you name your product. It’s worth it.

Basically, this thing was supposed to be a disposable, one-time-only phone charger that didn’t require an outlet. The idea being that you’re at a music festival or something with a grip of DERPs (sigh) in your back pocket whenever you wanted to juice up. I was recently at a press event where they were giving away rechargable portable phone chargers in the thanks-for-coming gift bags, so right away we know the business model is a little misguided. Why build an inferior version of something that already exists? It’s like buying a bicycle that disintegrates after five miles of wear.

Anyways, that’s not the incomprehensible part. As you can tell, DERP comes in a small plastic package that looks exactly like a condom. Because you want to be… discreet? Except I can’t think of anything that would make me more uncomfortable than someone whipping out a condom wrapper in a large crowd. Seriously, what the does that conversation look like?

“Oh, don’t worry, guys, this isn’t a condom, it’s just my portable phone charger. Haha, didn’t mean to scare you! Well, unless you wanted to fuck, and in that case—”

The only reasonable conclusion I can draw about DERP is that it’s built for 16-year olds who want to look like they’re having sex but are too scared to buy actual condoms. You know, just keep a couple in your wallet to make sure all the other kids at dodgeball know you’ve totally felt a bra before. Unfortunately, high schoolers don’t have a lot of investing money, so DERP didn’t come close to meeting its goal.

2) The goddamn thing is called “Audiopill,” and it’s a literal music pill.

Finally, you can swallow a giant plastic pill that beats inside your FUCKING BODY at a preset BPM. That sounds dangerous! And unrewarding!

“Hey man, what do you wanna do tonight? I’ve got some Benzos, and if we stay up, it’s gonna be awesome.”

“How about we swallow something that doesn’t get us high but instead makes our stomach throb to ‘Silhouettes’?”

You can never underestimate the desire for new, esoteric drugs, but I think this is officially a stretch.

Most of the shit people talk about millennials is silly and unfounded. I mean, I get it, the internet moves faster than ever, and if you’re isolated from the microcultures on Twitter and Tumblr, it might be pretty difficult to make sense of your teenager without resorting to the usual accusations of Satanic corruption and esoteric music pills (which you’d be right about), but for the most part, millennialism is a loose, unregulated, semi-problematic way to describe a tech-conscious generation that processes the world with a different sense of humor.

However, there are certain exceptions.

This isn’t the millennial generation. This is the “no, fuck you” generation. The “I feel like getting moving violation is a genuine life-destroying hardship and I deserve the empathy of the world to help me overcome” generation. The “I’m going to use the limitless possibilities of a connected world to try and make $300 real quick without offering anything beyond a sad selfie.” No, fuck you.

5) Is this Weird Kickstarter?

In a world of @dril, Simpsonswave, and Versace Tamagotchi, we are truly living in a golden age of people using social media to make strange, funny, vaguely artistic statements. Crowdfunding is a pretty strange medium to express your daydreams, but now that I’ve seen Cybermatrix 100, I’m maybe ready to admit that Weird Kickstarter exists.

You really need to scroll through the whole page to feel it in full, but yeah, Cybermatrix 100 promises “the gaming of the future” through a series of simple MS Paint diagrams. The pitch is full of these amazing, uncanny non-sequiturs. “[The Cybermatrix] comes with the powerbooth, powerportal, cyberstove, rom attachment, galaxy attachment, artificial intelligence system [ai system], and power-controller.”

I’ve been looking for a machine that runs Cyberstove for quite some time now.

6) There’s nothing worse than a grown man trying to go viral.

Shift-3. That’s all it takes to make a hashtag. Hold shift, press the “three” button. It’s more or less the same input we use to make exclamation marks, dollar signs, parentheses, and, you know, capital letters. Nobody on earth has ever thought the shift function was inefficient, but that didn’t stop Ben Gomon from trying to cash in. 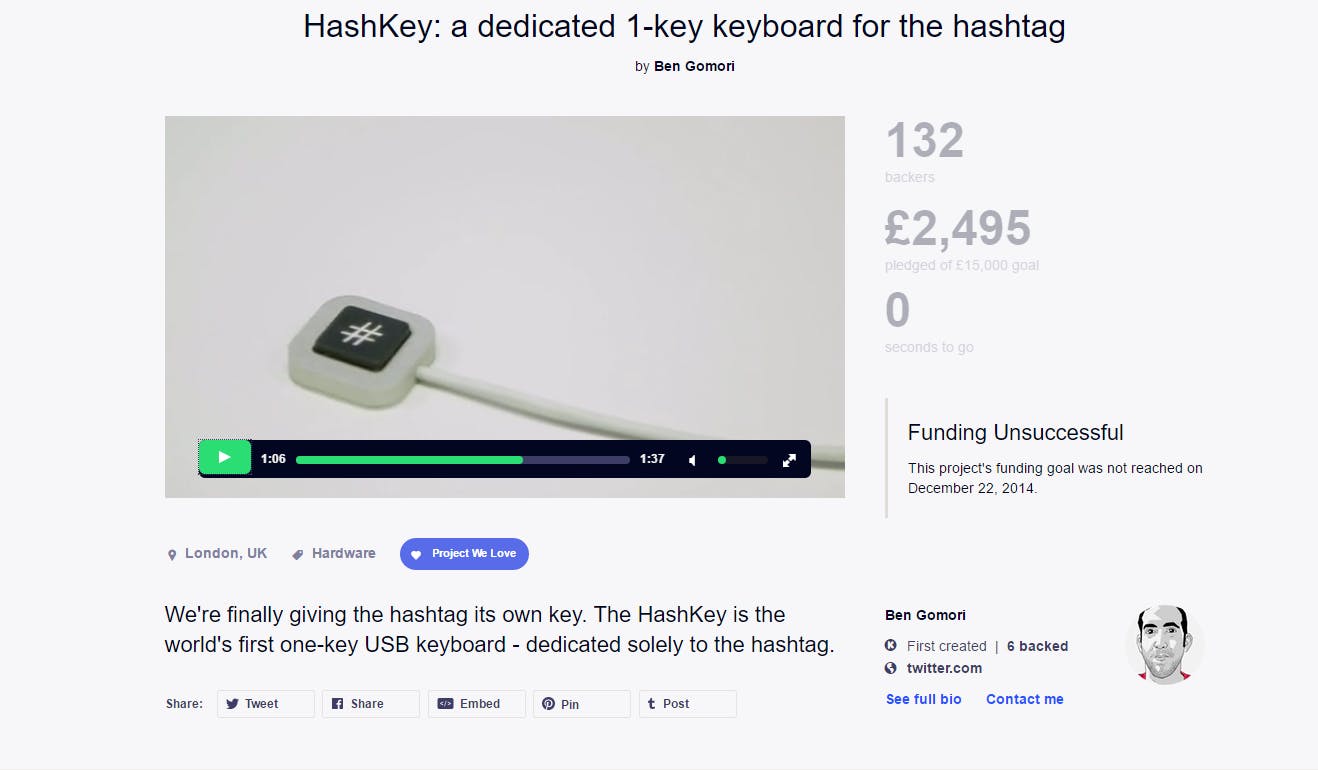 You don’t have to push two buttons to make a hashtag! #Win! #LOL! #Fatherfatherwhyhaveyouforsakenme. To be fair, nothing about this is earnest. We’re living in a world where some hapless kid ran into a ton of money when he wanted to make potato salad. Gomon probably thought he could wrangle blog momentum into a brief flash of virality for some of that delicious internet money. Unfortunately the only thing more tragic than failed geniality is a forced meme, so bye-bye Hashkey. You won’t be missed.

Aesthetically pleasing empty boxes! But, still: empty boxes. The Maslow Pyramid over-promises and under-delivers, much like every other piece of pop art I’ve ever encountered. “This art project is the quick fix for your next step in life.”

I could write at length about the pompousness of presenting an objectively useless item as an altruistic solution to the problems of life, or the incongruities of trying to sell literal “self-actualization” at a profit, but I feel like we can talk shit using objective statistics. Our dude wrote 1,800 words trying to convince us that his empty cardboard boxes are a worthy capitalistic endeavor, including hilariously classist advertising ploys like “Join the elite, collect art”—which is just the worst. Dude, your boxes look cool. Yet when you start framing them as a consumer product, they are definitely, still and always, empty cardboard boxes.*

*There’s a slim chance this whole Kickstarter is a piece of performance art mocking consumerism, and if it is, you got me, man. Well done.