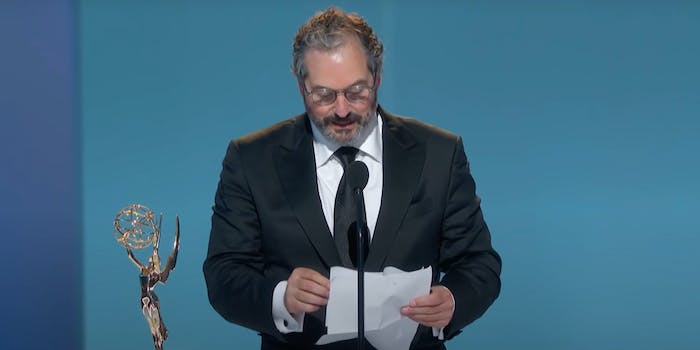 One went way too long while the other came off as condescending.

Award speeches can be something of a mixed bag: They can endear you to the audience in the room or at home, but they can just as easily turn you into a Twitter main character. In the case of The Queen’s Gambit, the award speeches for the two categories it won at the Primetime Emmys turned Netflix’s prestigious miniseries into one of the ceremony’s villains.

The Queen’s Gambit came into Sunday night’s ceremony with nine awards already under its belt from the Creative Arts Emmys. While the miniseries lost some of the early acting categories to Mare of Easttown’s Julianne Nicholson and Evan Peters, Scott Frank won Queen’s Gambit’s first Emmy of the night for outstanding directing for a limited or anthology series or movie. (He was up against Thomas Kail for Hamilton, Sam Miller and Michaela Coel for I May Destroy You, Craig Zobel for Mare of Easttown, Barry Jenkins for The Underground Railroad, and Matt Shakman for WandaVision).

Frank’s achievement arrived more than two hours into the Primetime Emmys, which had already been filled with comedy sketches that dragged and the orchestra’s attempt to play off several acceptance speeches, including a poignant one from Jean Smart. And just before Frank won, director Debbie Allen, the recipient of the Governors Award, called out the countdown that showed winners how much time they had left to give their speeches, telling them, “Honey, turn that clock off, I ain’t paying no attention to it.”

When Frank won his award, he took a pair of glasses out of his suit pocket, unfolded the two pieces of paper in his hands, and thanked everyone involved with his win—including tributes to stars Anya Taylor-Joy and Moses Ingram.

In theory, the speech was fine. Reading off a list of names can be dry or boring, no matter where you’re watching the ceremony, and it obviously was important to him to do so. But Frank’s speech went on for so long that the orchestra attempted to play him off three separate times.

He also got the obligatory Wikipedia edit.

There were a lot of comparisons between Frank’s speech and the speeches given by Allen before him and Coel, who won the very next award for outstanding writing for a limited or anthology series or movie. Coel dedicated her award to “every single survivor of sexual assault” and her speech only took a fraction of the time Frank used for his, but hers carried a more powerful message.

“Write the tale that scares you, that makes you feel uncertain, that isn’t comfortable,” she said. “I dare you—in a world that entices us to browse through the lives of others to help us better determine how we feel about ourselves, and to in turn feel the need to be constantly visible, for visibility these days seems to somehow equate to success—do not be afraid to disappear from it, from us for a while, and see what comes to you in the silence.”

People’s ire for Frank was significant enough that when the all-male team for The Queen’s Gambit won best limited or anthology series, people were preemptively mad that he was going to speak again.

Fortunately, for those people, Frank didn’t speak again. The honors for the speech went to The Queen’s Gambit executive producer William Horberg, who thanked everyone who made the show a word-of-mouth hit—according to Netflix, it’s the streamer’s most-watched limited series ever—and Netflix for taking “a chance on risky material.”

He also thanked Taylor-Joy, who starred as the young chess prodigy at the center of the miniseries and who he credited as making chess sexy again.

“What can I say?” Horberg said to Taylor-Joy. “You brought the sexy back to chess, and you inspired a whole generation of girls and young women to realize that patriarchy has no defense against our queens.”

Which, to put it lightly, did not land well with viewers—even people who liked The Queen’s Gambit.

It’s not a reference that came out of nowhere. It’s something of an inside joke among the cast and crew, and as Taylor-Joy told Vanity Fair earlier this year, ​​“We used to joke on set that we were bringing sexy back to chess. We didn’t really think that’s what people would actually think.” But if you’re not reading interviews from the cast and crew, Horberg’s speech makes it sound like he objectified Taylor-Joy before going on about how her performance inspired women and girls to take down the patriarchy.

It also shows the limits of an award speech: Even if everyone in the room is in on the joke, viewers at home might not be, so a line that is meant to be inspirational—and it received applause in the room—it can come off as condescending and sexist on TV.