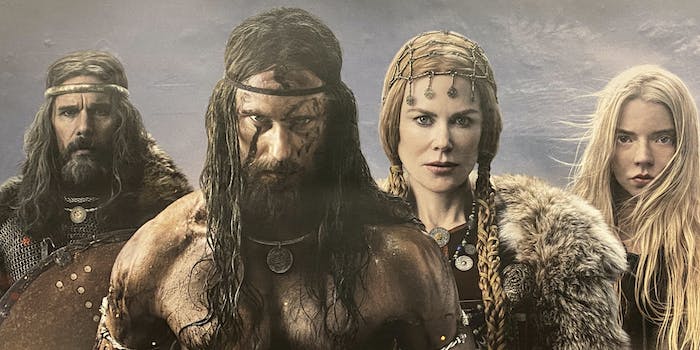 ‘The Northman’ subway posters didn’t include the title, but the internet gave it new ones

The missing item on the poster is glaring.

Promotion for The Northman, Robert Eggers’ historical Viking revenge epic, is in full swing as the cast and crew attend premieres, speak to the press about the film, and more commercials pop up on TV. But in cities like New York, it also involves big, splashy posters in public transportation hubs—something that can go horribly wrong (or hilariously right) if one key factor is left off the poster.

Earlier this week, posters for The Northman started to appear in New York subway stations featuring stars Ethan Hawke, Alexander Skarsgård, Nicole Kidman, and Anya Taylor-Joy all dressed in period-appropriate costumes. The names of their co-stars (Claes Bang, Björk, and Willem Dafoe) appear above them, the U.S. release date (April 22) appears below them, and there are three separate mentions of writer-director Robert Eggers along with the Icelandic novelist Sjón, who co-wrote the screenplay with Eggers.

Missing from the display? The actual title of the film that’s being advertised in New York subway stations.

For people looking forward to The Northman, are tuned into upcoming releases, or are fans of any of the people attached to the film, they don’t necessarily need a title. But it’s possible that some people seeing the poster will have absolutely no idea what the title of an upcoming Eggers movie starring four famous actors in Viking costumes is called.

According to Vulture, some of the subway station posters that don’t feature The Northman’s title have already been taken down. We’ve reached out to Focus Features for comment.

Some people pointed out how prominently Eggers’ name was featured on the posters compared to the lack of a film title while others noted how the poster didn’t look distinguishable from other genres being advertised in subway stations.

But, as the photos really took off on Twitter, it also sparked a parade of photoshops in which people came up with alternative titles for The Northman, which included sequels to The Devil Wears Prada, Ice Age, and a live-action Tarzan (which doubly works because the earlier live-action film also starred Skarsgård). All of which would at least be amusing to see in their own right.

It’s hard to say how much of an effect the subway ads might have on film turnout when The Northman opens on April 22. But if nothing else, perhaps the mistake in the titleless advert going live and the spinoffs it inspired will end up as a much better way of getting the word out.