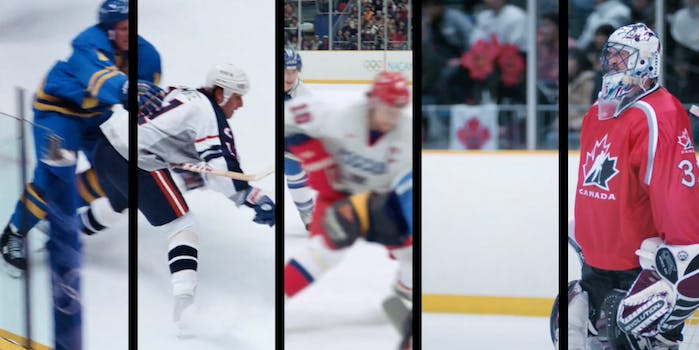 You won't see it coming.

The Nagano Tapes: Rewound, Replayed & Reviewed is a 2018 documentary from director Ondřej Hudeček about the Czech Republic hockey team’s gold medal victory at the 1998 Winter Olympics. That particular Olympics, which took place in Nagano, Japan, was notable both for being the Czech Republic’s first gold medal and the first year that professional hockey players were allowed to compete, and it’s narrated by Giancarlo Esposito.

But three years after The Nagano Tapes’ release, it’s gone viral not for the crux of the documentary itself but rather its very head-turning intro homage.

When you hit play on The Nagano Tapes, which is available to stream on the Olympics’ official website, it starts off like your average sports documentary. You’re shown flashes leading up to the 1998 Winter Olympics alongside some of the world’s best hockey players on the ice as sports commentators set up the gold medal match between the Czech Republic and Russia. And then the music picks up as the screen reads, “In 1948, Communist leaders seized power in Czechoslovakia and established a one-party state allied to the Soviet Union.”

“I cannot stress enough just how much you need to stop whatever it is you are doing and watch the opening titles of this documentary,” @VoltySquirrel wrote in a now-viral tweet. “I promise you’re not ready for what’s coming.”

You’ll want to watch this with as little set-up as possible. You don’t even need to be a casual hockey fan to appreciate the sheer art of it all. Trust me. (If you prefer to go to the source, go to around the 1:12 mark.)

If you don’t recognize the tune, it’s “A Cruel Angel’s Thesis,” which anime fans will recognize as the theme song from Neon Genesis Evangelion. And the choice of song by Hudeček isn’t random: The opening sequence also nods to Neon Genesis Evangelion’s stylization and imagery in how it depicts both communist-era Czechoslovakia (and the events that eventually led to the Czech Republic) as well as the history of country’s hockey team. Alongside those images are flashes of words like “socialism,” “capitalism,” and “revolution” in all-caps.

And if you’re wondering if this is somehow edited, The Nagano Tapes lists “A Cruel Angel’s Thesis” (which is written as “Cruel Angels Thesis”) as one of the songs used in the end credits.

But whether people missed it when the clip went around two years ago or just were not prepared for the juxtaposition of hockey and the theme from a 25-year-old anime, the reaction online was still the same: Their minds were blown.

“This story and the emotions are universal,” Hudeček said in a 2019 video from Czech Centre London. “Any national team which achieves something that big may unite a nation for some time. Such a story is understandable everywhere.”

And while Hudeček is talking about the universality of an unlikely national win, it turns out that the internet’s collective freak out over the presence of “A Cruel Angel’s Thesis” in a hockey documentary is almost as universal.