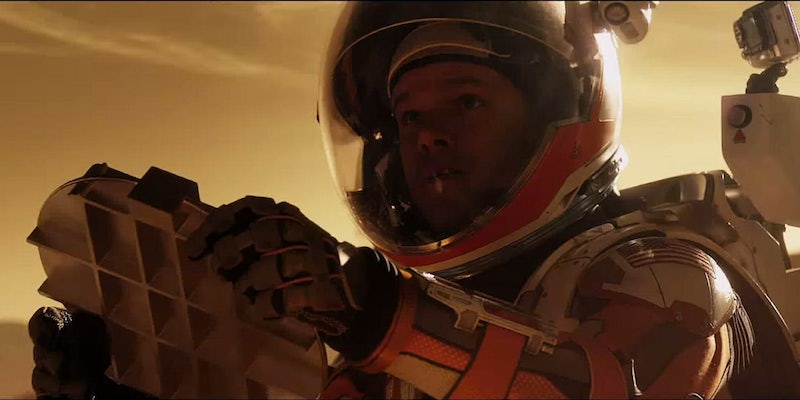 Many people think ‘The Martian’ is based on a true story, so that’s cool

Maybe a giant meteor should just wipe us out now and get it over with.

Ridley Scott’s The Martian has an impressive 93% Fresh rating on Rotten Tomatoes. It pulled in a whopping $55 million on its opening weekend. It is clearly is a hit film in every possible way. Its audience, however, has some major flaws.

BuzzFeed was the first to spot an odd phenomenon on Twitter: Many people think The Martian is based on a true story.

That’s right. They think that astronauts once went to Mars and left someone behind.

We decided to verify this phenomenon by checking Facebook, looking for evidence of people thinking that Matt Damon‘s struggle to survive on Mars was a genuine part of American history.

As it turned out, Facebook digging confirmed what BuzzFeed had found on Twitter—the phenomenon is real.

Here are some of the best, funniest, and most depressing Facebook statuses conveying the belief that The Martian is based on real life. (At least most of the people who think this aren’t confident enough to put it on Facebook themselves.)

Sometimes you’re smart enough on outer space to know The Martian wasn’t based on reality but not smart enough to know which theater doors to enter.

We can laugh at the notion of confusing the film with reality, but let’s not forget an important truth: Those tweets had collateral damage—innocent lives have been forever changed.

Kaelyn tweeted that I thought The Martian was based on a true story and now it's ended up on BUZZFEED. I'm never showing my face again.

The great thing about this kind of mistake is that you can feel very good about how intelligent you are. You could have failed algebra and yet you can still take heart that at least you know NASA hasn’t visited Mars yet.

For the record, The Martian was adapted from a novel.