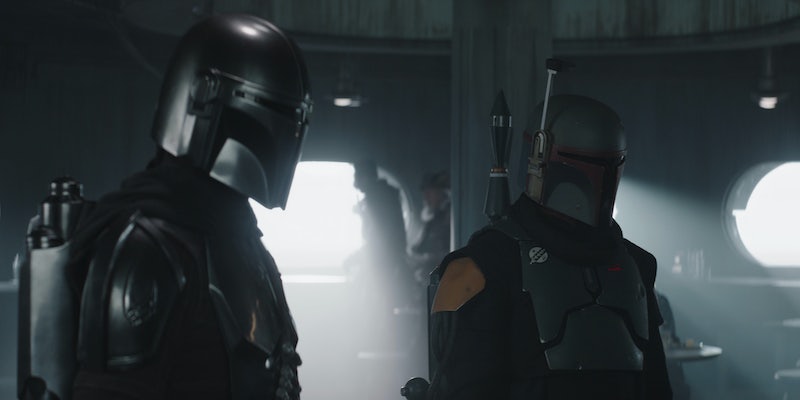 Boba Fett will have another adventure.

The Mandalorian dropped the motherload of all surprises in the Mandalorian season 2 finale with the reveal of a new Boba Fett project, and now series creator Jon Favreau is providing some more details about what that means for the Star Wars universe.

The Boba Fett reveal arrived during the post-credits scene following a jam-packed episode. After he and Fennec Shand overtook Jabba the Hutt’s old castle, Boba Fett sat on the throne as a black screen read,” The Book of Boba Fett. Coming December 2021.” Over the weekend, fans were left to wonder if The Book of Boba Fett would be a newly announced spinoff or it was the direction that The Mandalorian’s third season would take.

On Monday, Lucasfilm ended that debate with the debut of a new logo and the announcement of another Star Wars TV show—and the third Mandalorian spinoff that takes place within the show’s timeline after Rangers of the New Republic and Ahsoka. Starring Temuera Morrison and Ming-Na Wen, the show’s creative team would include Mandalorian creator Jon Favreau, writer-director Dave Filoni, and director Robert Rodriguez, who directed Boba Fett’s return to the Star Wars universe in “The Tragedy.”

The Book of Boba Fett is now the 11th Star Wars TV show announced or expanded upon within the past two weeks after Disney’s four-hour investor day call; with The Mandalorian, the number comes to 12.

But why not just announce the project then? As Favreau told Good Morning America Monday morning, he wanted it to be a surprise to fans.

“We wanted to hold this back because we didn’t want to spoil the surprise during the big Disney announcement of all the shows when Kathleen Kennedy was up there, and so they let me keep this one secret,” Favreau explained. “So this is actually separate from The Mandalorian season 3.”

“What we didn’t say in that announcement is that the next show coming up, Kathy said the next chapter, and that’s going to be The Book of Boba Fett. And then we go into production right after that on season 3 of The Mandalorian, you know, back with the main character that we have all known and loved. So that’s going to be pretty soon following that. We’re working on that pre-production now while we’re in production on Boba Fett.”