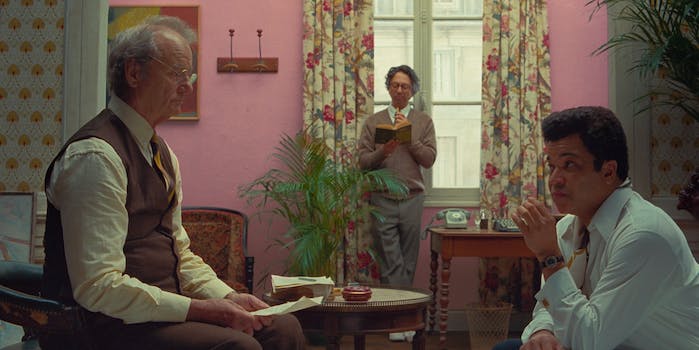 Wes Anderson’s trademark style is everywhere in The French Dispatch—almost overwhelmingly so. I could’ve easily spent hours pondering how the layout of an office building viewed from the outside works, or examining every detail passing by in a tracking shot, or even viewing the places where the writers of the titular magazine write out their chronicles on typewriters. It’s the kind of immaculate production design from Adam Stockhausen (who already had multiple Anderson films under his belt prior to this one) that Wes Anderson movies are known for.

RELEASE DATE: Oct. 22, 2021
DIRECTOR: Wes Anderson
RELEASE: Theatrical
Serving as a love letter to magazines like ‘The New Yorker,’ ‘The French Dispatch’ dives into the titular publication’s final issue as three articles, a travelogue, and an obituary play out on the screen. While not all of it quite gels together, the real standout is the film’s immaculate production design.

The French Dispatch is less a singular film than a series of vignettes with a certain thematic resonance that ties them all together while serving as a massive homage to the New Yorker of old; some work wonderfully, both as their own stories and as part of the larger narrative thread, others, less so. With many of the usual players in the wings bringing delightful charm and wit, it’s Jeffrey Wright (a newcomer in the Anderson repertoire) who makes the biggest lasting impression.

The French Dispatch of the Liberty, Kansas Evening Sun was launched in 1925 by Arthur Howitzer Jr. (Bill Murray) to give Kansas a taste of France from its view of Ennui-sur-Blasé, but after 50 years, Howitzer Jr. died from an apparent heart attack, prompting its staff—everyone from his hard-working journalists to the editors, legal advisors, and even a writer who’s never actually written a single word for The French Dispatch—to come together to craft his obituary. As part of his will, Howitzer Jr. insisted that the magazine shut down, so what follows is a meandering glimpse into that final issue.

Like the best kind of obituaries, it paints a very vivid image of a singular man who was incredibly particular about how the magazine was run. They’re the quirks of things that made him a pain to work with but also the best kind of editor to have in your corner, whether it was to protect writers from themselves or to nurture. Among his more consistent refrains were his insistence that no crying takes place in his office and his advice that his writers “make it sound like you wrote it that way on purpose.”

“He coddled them, he coaxed them, he ferociously protected them,” the Narrator (Anjelica Huston), reading from the finished obituary, says. Interspersed throughout The French Dispatch, we see past Howitzer Jr.’s exterior, whether it’s a suggestion to add something flowery to an article, to question some dubious expenses, bail a new and promising writer out of jail, or even suggest that the saddest part of an article go back in (even if it could result in the tears he detests so much).

The influence that Howitzer Jr. had on his staff, both directly and indirectly, is visible through the other four installments. In “The Cycling Reporter,” Herbsaint Sazerac (Owen Wilson, making the most of his limited screen time) takes readers on a guided tour through the grimier parts of Ennui-sur-Blasé. Narrating it as if he’s physically guiding the tour, Sazerac describes the old and new city, two drastically different visions that are shown side-by-side; one in black-and-white, the other in color.

The features are far meatier, each toying with the push and pull of art, capitalism, politics, and passion. J.K.L. Berensen (Tilda Swinton) is stationed behind a lectern as she relays “The Concrete Masterpiece,” the winding tale of Moses Rosenthaler (Tony Revolori as a young man, Benicio del Toro as an older man), a convicted murderer with a renewed interest in painting, his prison guard (and his muse) Simone (Léa Seydoux), and the art collector Julian Cadazio (Adrien Brody), who tries to make Moses a star—but mostly wants to make himself rich.

Lucinda Krementz’s (Frances McDormand) entryway into “Revisions to a Manifesto” is more insular. She meticulously chronicles the story of Zeffirelli B. and Juliette (Timothée Chalamet and Lyna Khoudri, respectively), two star-crossed lovers in the middle of a student revolution, in her journal. She’s witness to all of it, but Krementz also openly struggles with the idea of “journalistic neutrality” as she sleeps with her subject, revises Zeffirelli’s manifesto (first superficial, then substantial), and clashes with a set of younger ideals.

The final feature, “The Private Dining Room of the Police Commissioner,” comes from food journalist Roebuck Wright (Jeffrey Wright), who has a typographic memory and is a blend of James Baldwin, New Yorker food critic A.J. Liebling, and Tennessee Williams. Sitting for a talk show interview with a host played by Liev Schreiber, Roebuck Wright is able to recite his story fully. It’s the most ambitious, starting off as a profile of Lieutenant Nescafier (Stephen Park), the personal chef of a police commissioner (Mathieu Amalric), before turning into a caper after the commissioner’s son is kidnapped.

There’s a lot to admire in The French Dispatch. Constantly juggling between different color schemes, tones, and aspect ratios, The French Dispatch has a fantastical visual language, even if it’s almost distracting. One of its more dazzling sequences, which occurs during Roebuck Wright’s article, is a stylistic and gripping action sequence, a nod to French comic books. Anderson’s usual players are game as always to play a parade of characters who are both incomprehensible and captivating all at once, but it’s Jeffrey Wright whose performance lingers most.

It’s a grand spectacle unto itself, one that takes side tangents and turns them into slideshows, plays performed on the stage, and turns into the focus of their articles; the middle section is where it flounders most. While the thematic resonance eventually comes together and it’s one of Anderson’s more political films, the film’s grander message can sometimes be lost amid the pristinely detailed sets that are so frequent in his films. Still, Anderson’s ode to publications like the New Yorker of old has plenty of charm and wit—especially for those in the profession—to carry you to the end.

The French Dispatch screened at the New York Film Festival on Oct. 2. It will debut in theaters on Oct. 22.