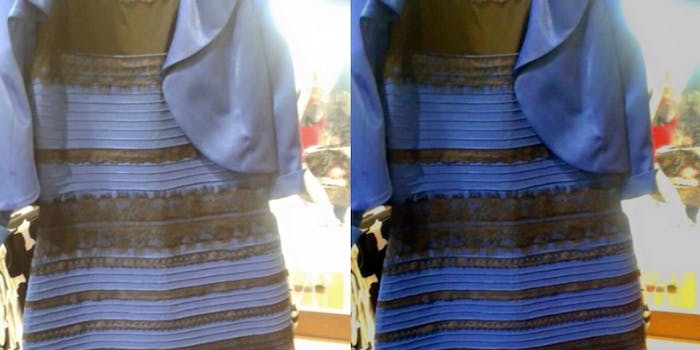 White and gold? Blue and black? Either way, #TheDress is the most important meme in the history of the viral Web.

I’m typing these words at a truly historic moment. The same hashtag occupies the top spot on both Facebook and Twitter. Nobody can shut up about it on Tumblr, either. It’s got a profile on Tinder. The Blaze and the ACLU and everyone between has weighed in. We have to, at last, admit what’s happening here: Kim Kardashian’s ass didn’t break the Internet—#TheDress did. 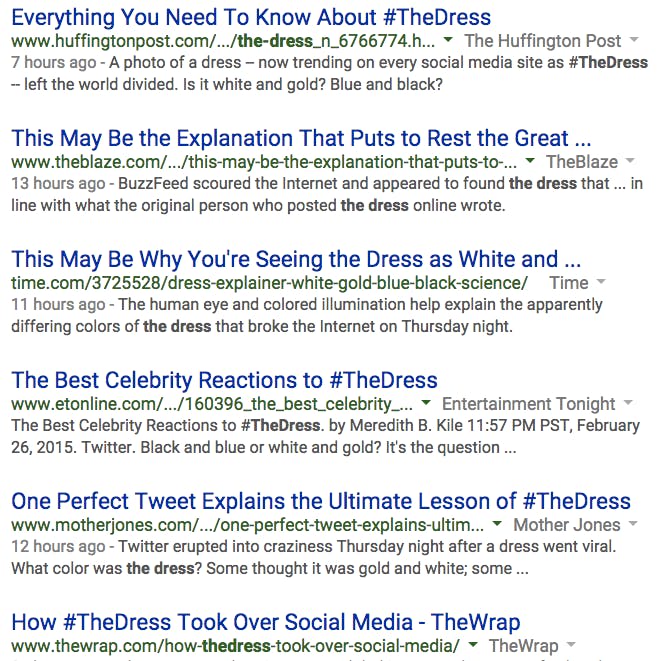 Why do we care about the colour of #thedress? Bevil Conway http://t.co/DzDCPOqb2b pic.twitter.com/Siv3KnxBpl

Whether you see the dress above as black and blue, or white and gold, or maroon(?), or encompassing more than two colors(?!) is entirely beside the point here. What matters is that virtually the entire demographic of human beings who waste time online seems to really care.

We are caught in the undertow of the most relatable meme to ever crest our collective consciousness, and it somehow succeeded in washing away what was, for a few short hours, a juggernaut of virality in its own right: a prolonged llama chase in Sun City, Ariz. The subsequent death of beloved actor Leonard Nimoy has done little to diminish its momentum.

This day will live in infamy as the LlamaDress day. Thank u internet, for quashing another drab TBT. #llamadressdrama pic.twitter.com/FEvM9sqCbX

I truly believe we’ve discovered the lowest common denominator on record. Where a subject like net neutrality presents a bewildering array of nuances and complexities, #TheDress narrows our thinking to pure, spontaneous intuition. Unless you’re blind or an infant, you’re able to take sides in the debate, which the realities of perception ensure will never be settled. We can only split into intractable, fundamentalist “teams”—a favorite pastime of people perpetually online—and argue until the sun explodes. Meanwhile, the mere existence of a view opposite one’s own is unfathomable. We’re haunted by this alien impression as by a ghost that flits just out of reach. We are driven to madness.

Oh, we’ll bring every media angle to bear on #TheDress—what company made it, where to buy it, why it blew up, how ugly it is, the science of color, the puzzle of gestalt imagery, the fishbowl quality of Internet discourse, etc. On that last score, actually, Tumblr user pleasedontsqueezetheshaman had something illuminating (and terrifying) to say:

My working theory on the increase of excitement about memes that are rapidly declining in quality is that we are “locked in” to social media now and are behaving like people in solitary confinement who are forced to extract joy and companionship from progressively boring things, like moving from finding a cockroach to talking to a dustball or fingernail clipping.

Yesterday we spoke of who wore the dress. Today we speak of the dress. Tomorrow: a single thread. Can it be any coincidence that we continually embrace paradoxes framed as either/or questions? We’re drilling down to the quantum nature of the universe itself, protons and electrons, matter and anti-matter, light and dark. In some sense, the battle of #TheDress is a proxy for our fiercest fights on climate change or reproductive rights, absent the ideological stakes. It’s the ideal flashpoint for a dispute in which precisely nothing is said. We’re not at odds with each other because #TheDress holds any higher value—it’s because we want to be.