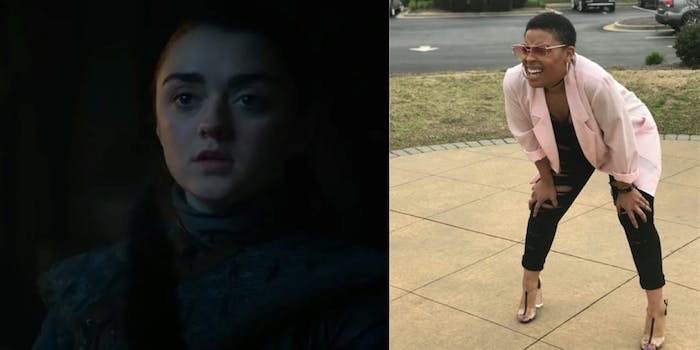 Game of Thrones‘ final season promises plenty of epic conclusions for fans of the nearly decade-long show, but few as highly anticipated as Sunday’s throwdown with the Night King and his undead wight army. Unfortunately for many fans, the hour-and-a-half nighttime battle—aptly titled “The Long Night—proved darker than their television and computer brightness settings could handle, leading to plenty of memes flooding Twitter almost immediately after the episode began to air.

So that episode huh 👀#GameOfThrones pic.twitter.com/nPg6kDsLON

After all, when the majority of the cast’s lives are on the line, visibility is kind of important. Last year’s viral photo of Kalin Elisa squinting in disbelief made more than a few appearances in memes, as did last week’s passive-aggressive Daenerys’ squint.

Me trying to figure out what’s happening in #GameofThrones pic.twitter.com/V2vQuNw521

My friends and I trying to watch this dark af episode #GameofThrones pic.twitter.com/3wFwSMM0AC

Empire screenwriter Eric Haywood suggested a more accurate name for the night’s episode would have been “Turn The Brightness Up on That Bitch.”

If you’re wondering about the title of tonight’s #GameOfThrones episode, it’s: “Turn The Brightness Up On That Bitch” pic.twitter.com/vdZwDMr53s

Several fans began posting images of spoilers without context or shot from their favorite scenes, a.k.a. entirely black photos.

My favorite scene from today’s episode of #GameOfThrones

ffs why is it so dark pic.twitter.com/mlOAF73pED

At one pivotal moment in the episode, the priestess Melisandre used her magic powers to light large portions of the battlefield in flames. Fans everywhere blessed her, not for her help in the battle but because they could finally see what the hell was happening on their televisions. A tweet by BuzzFeed writer Nora Dominick thanking The Red Woman wracked up over 100,000 likes in hours.

I would like to thank Melisandre for increasing the lighting in this episode by 100 #GameofThrones #GoT pic.twitter.com/ngIQ5tHaDO

So while Game of Thrones fans appreciated finally getting the throwdown they’d been wanting for years, many had one tiny request for HBO: please don’t make it so dark next time.