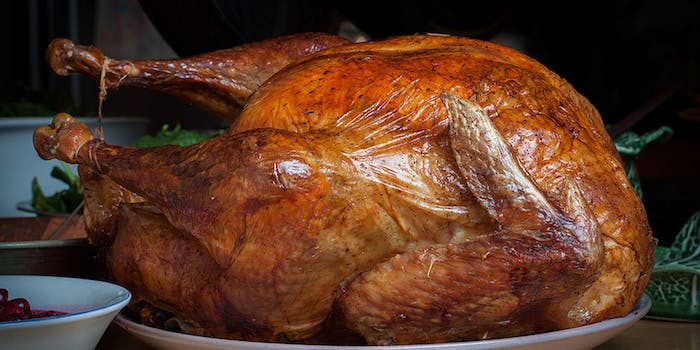 No amount of gravy can cover up a mistake like this.

Well, you can officially stop complaining about your drunk uncle or racist grandmother now, because this Thanksgiving horror story is easily the worst of 2014: In the heady confusion of the holiday, one unfortunate redditor sent a dick pic to his girlfriend’s sister—and she liked it.

“I’ve been dating my girlfriend for almost 3 years now and would never cheat on her,” explains Gregorianchant1 in a post on the subreddit TIFU (“Today I Fucked Up”). He would, however, get a bit sloppy in his attempts to sext with her while planning a family get-together:

I was texting my girlfriend and her sister. I was texting her sister about her staying out our place after dinner (She didn’t want to pay for a cab back would be $100+). Meanwhile my gf starts sexting me from home. Giving me some NSFW pics and dirty messages. I am responding back and forth. She asks me “Show me what you’ve go right now”. Right as I read that I got a call (Work stuff) and have to take care of that really quick. Mid-way through the call my gf’s sister texts me back about staying after thanksgiving. In my horny rage I didn’t notice she had responded, I just took a picture of my dick, clicked the first option on my phone and sent the pic saying “You think you can handle this?” About two minutes later her sister texts me back “I’ve been wanting it for the longest time”. Needless to say, my response to her wasn’t what she wanted to hear, and my girlfriend is pissed. Thanksgiving should be fun!

The trio got through their meal unscathed—i.e., without any parents getting wise—but before and afterward, the sisters raged at one another, and our correspondent spent a night on the couch. “My girlfriend’s sister left in the morning didn’t say good bye just left a note saying she wouldn’t be talking to us anymore and to enjoy Christmas without her,” he wrote in an update. “My gf proceeded to break down into tears and blame me for all this … I’m pretty sure I broke two sisters apart.”

The silver lining? “For all of you asking,” the accidental lothario clarified at one point, “my girlfriend is the hotter sister.” Which we’re sure is all she wanted to hear, really.