We ranked the weirdest Tinder bros in Thailand

If you were expecting a Thailand Tinder travelogue featuring a bunch of Ping-Pong shows, ladyboys, and questionable sexual freedom, then sorry to burst your exploitative bubble but this hoodrat was in the wrong part of the country. Greetings from Chiang Mai.

Six months into this global shitshow of mine, I decided to try finding love in the epicenter of the digital nomad movement—a city in the northern mountains known as Chiang Mai, where the beer is cheaper than water. The only catch is that there is no alcohol available for purchase (legally) between the hours of 2pm and 5 pm or midnight to fuck-that-o’-clock because Thailand is doing a bit of rebranding and trying to clean up its image. I found myself schwasted damn near every night come 11 pm and in total panic the hour before all stores and bars stop selling the good stuff.

My inability to keep my shit together served as perhaps the only notable marker of a Tinder scene oversaturated with basic white bros so in love with bullshit startup terms like “bootstrapping” you’d think they were actually interesting and had a foot fetish. I met one Tinder man in the flesh by complete accident when a couple of friends and I crashed the end of a dance party with a bottle of shitty Thai rum and a bit of beatboxing. He was pretty much as advertised.

The night ended with the courtship with a man who kicked off the sexytimes by blasting a Dionne Warwick song, then asking if he could touch my boob. Though I left Thailand early in a dengue fever haze, the week after I’d returned to the good ol’ U.S. of A., I realize that the titty-toucher constituted my one true romance on the trip. If your man won’t cuddle with you in the heat of the dengue sweats while you rattle off Mayo Clinic stats, I’d suggest dropping his ass post-haste.

I’ll be Tindering coast to coast before heading back to my tribe of shitkickers in Japan, so gird your loins, America. In the meantime, here’s every non-basic I could scrape from the algae-ridden, uninspired cesspools of Chiang Mai. 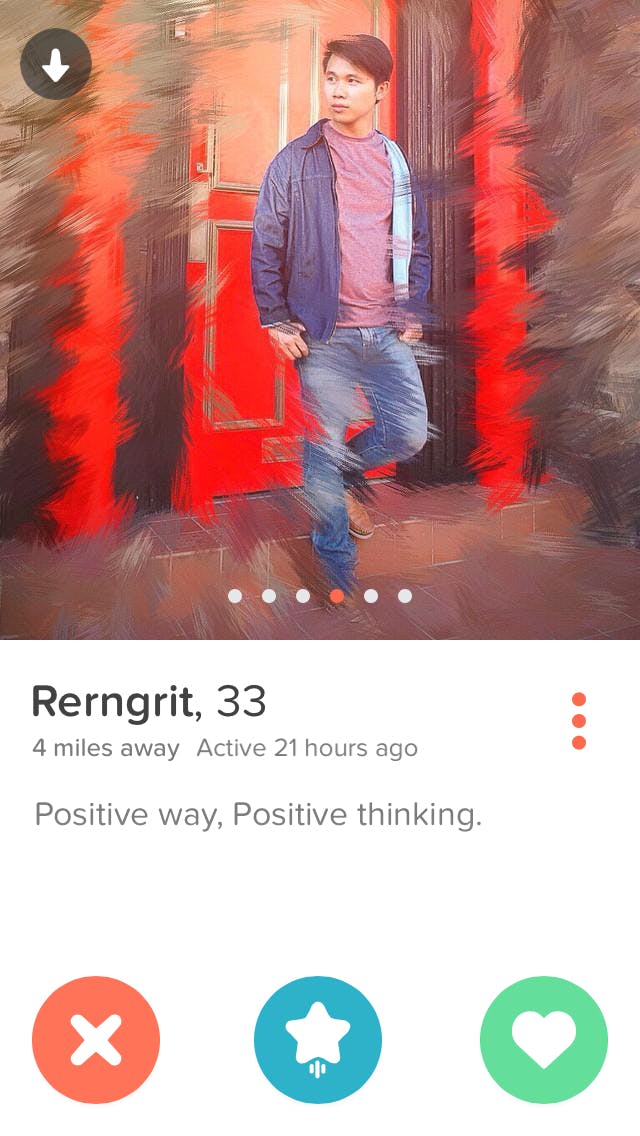 Have you ever been to a ’50s-style diner where the tables are brushed steel and everything looks like the inside of an old school hoopty? Welcome to Rerngrit’s world. This “positive way, positive thinking” gentleman takes the road less traveled and swaps actual artistry with an accidental Photoshop filter that makes it look like he impaled the back of his knee on a door while also somehow emitting magnetic waves from his left nipple, from an area just above his crotch, and from many more unfortunate places. 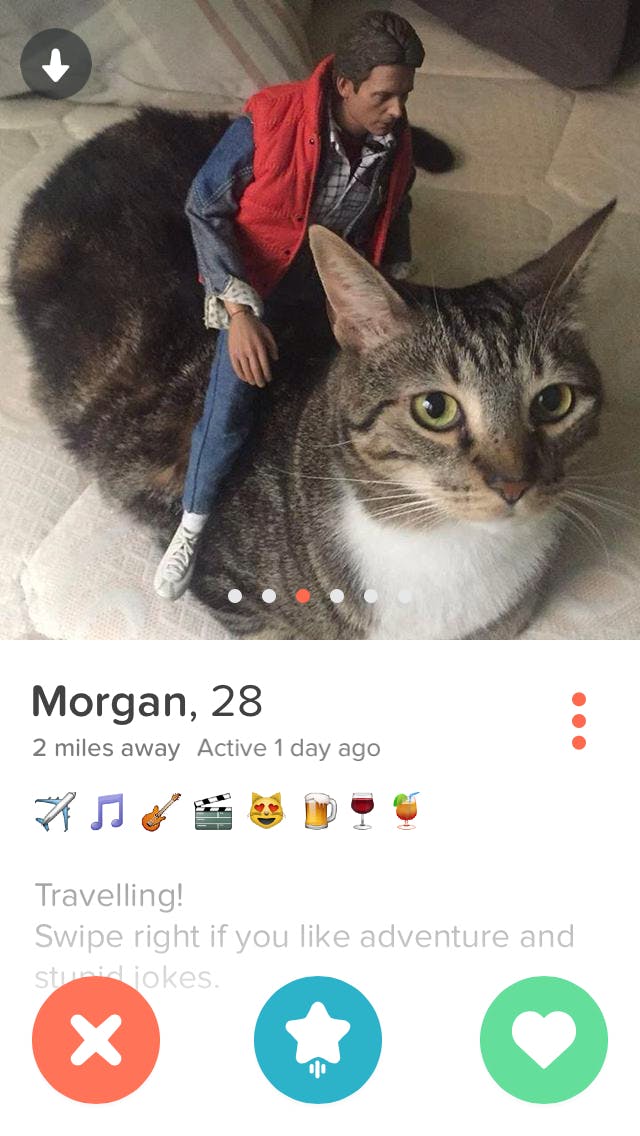 I’ve yet to determine whether Morgan is the Michael J. Fox Back to the Future doll or the cat he’s straddling, but “fuck you and the cat you rode in on” is fast becoming one of my favorite insults to lob at people. The fact that Morgan believes in zero bed sheets and throw pillows means he’s either stained every bedroom set he’s owned and is therefore the master of messy sex or he’s the type of person who makes furniture out of pizza boxes. The hostage situation-eyed cat leads me to believe the latter. 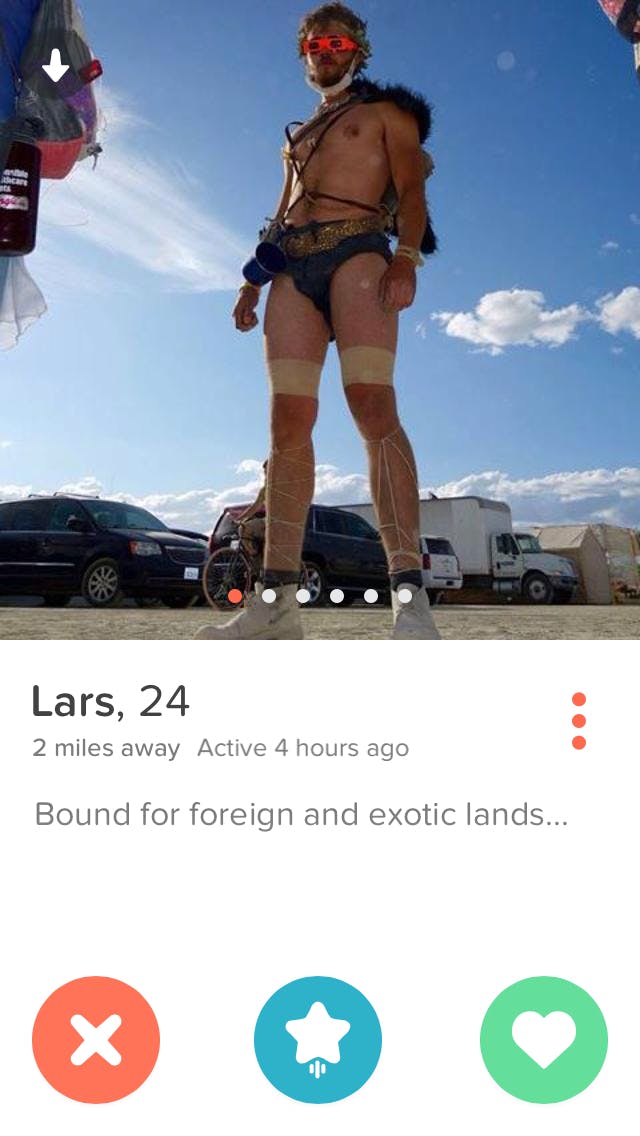 No, Lars, just because you’re at Burning Man doesn’t mean your 3D glasses will magically fire up and turn shit out for you. Between the poorly executed fishnets and the box truck in the background, I can only imagine all the indentured “contract workers” constructing camps along the Esplanade for his fellow basic tech bros™, whose idea of originality in costuming is wearing a plain dusk mask instead of decorating it. Perhaps Lars can put one of the workers on the line while he hurriedly pumps out the next on-demand dishwashing app, surely bound to ignite the world faster than a Jehovah’s Witness rapture prediction. 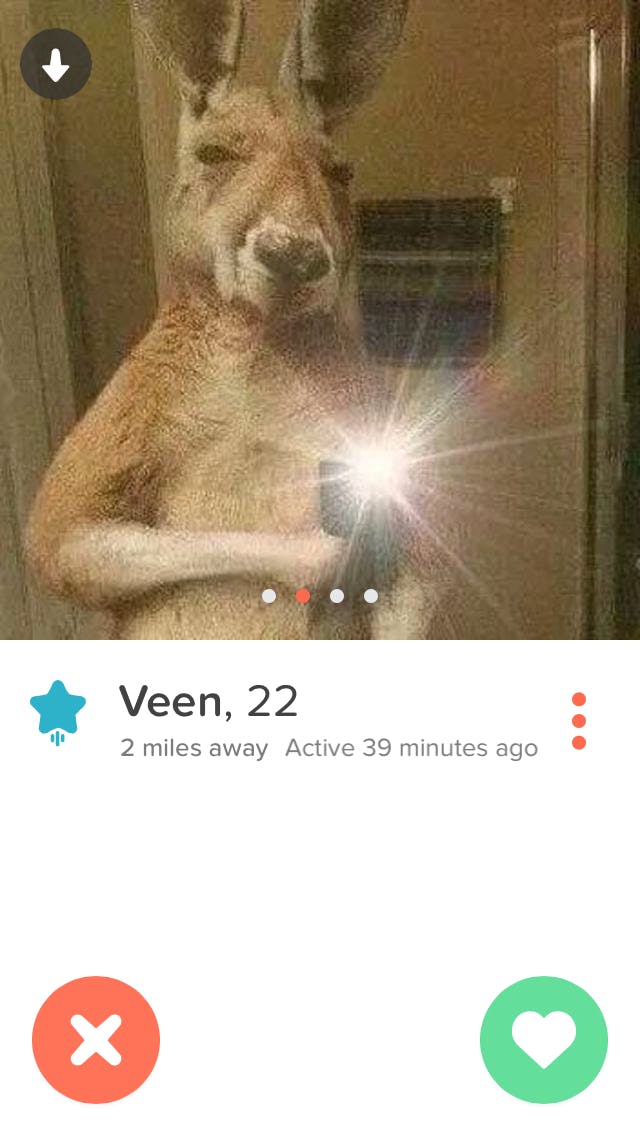 Is Veen glaring at me, or is his lens flare game just that strong? More importantly, let it be known that during the course of my time in Thailand, I got “super-liked” by a kangaroo. If both an unnecessary flash and a marsupial seal of approval are any indication of where Tinder’s heading as I head into my seventh month of this shit, it’s that things can only get crazier from here. Here’s hoping Veen hotboxed his bathroom and this photo’s not pixelated, just clouded in dank smoke. 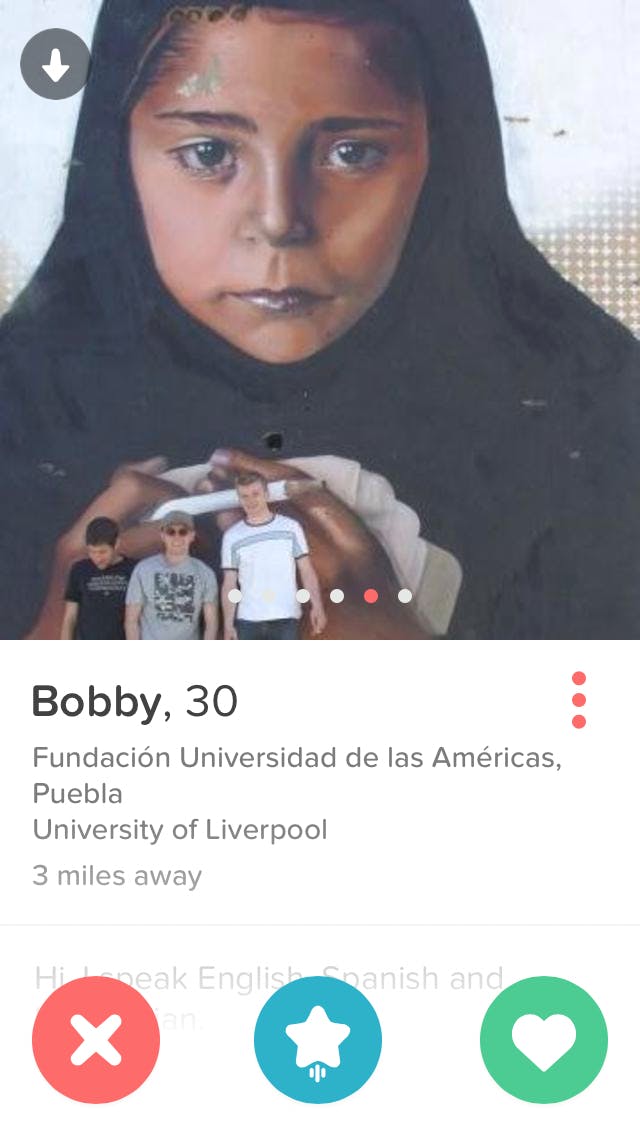 Shout-out to the world’s saddest backdrop, providing little information as to who actually runs this Tinder account. Either this is a three-for-one package deal, or Bobby’s trolling goes even deeper, and it turns out he’s the guy who put a firehose in the hands of this forlorn mural. Conceptual art aside, listing every language you speak as your sole bio text is about as sexy as perusing an absentee voter ballot’s language options when trying not to pick the biggest dweeb as city comptroller. 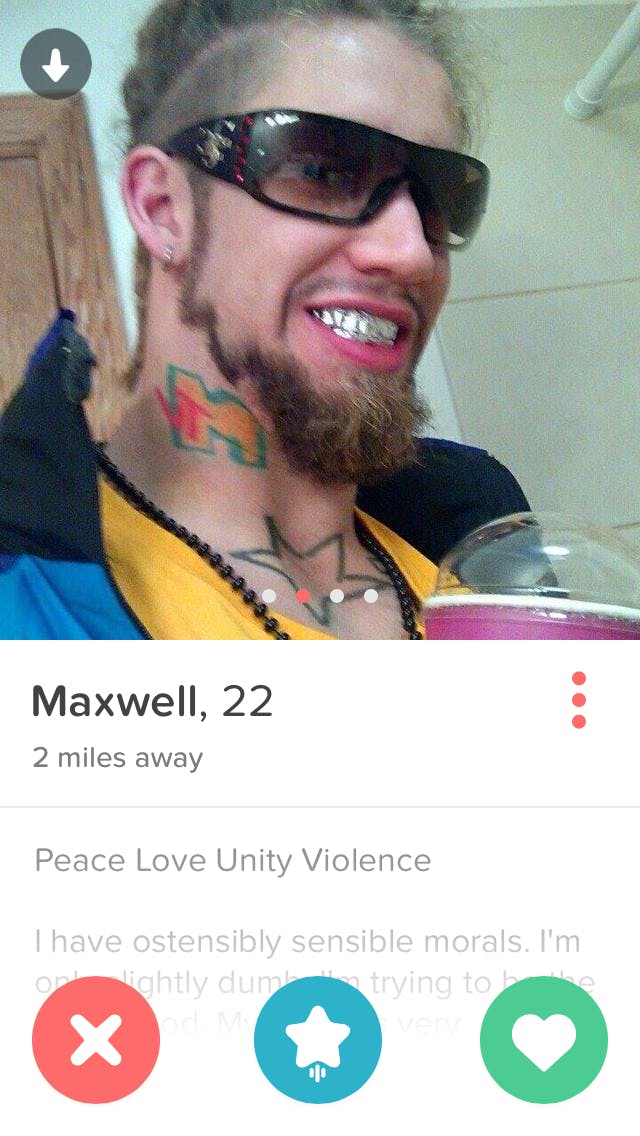 Jody HighRoller, is that you brandishing that slurpee?