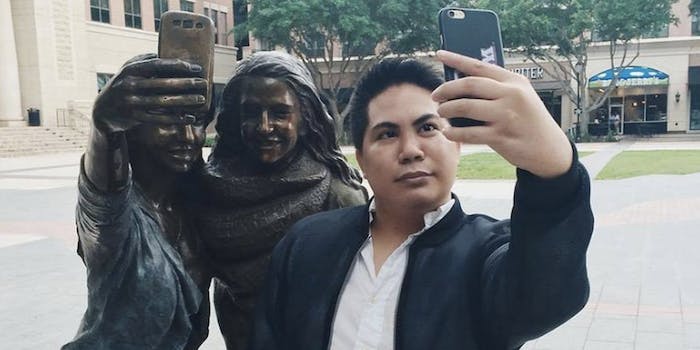 The haters have spoken.

Selfies, for better or worse, will probably be a thing until the end of time. They’ve become normalized, and whether you want to admit it or not, you’ve been involved with a selfie at some point, so chill out—especially if you live in Sugar Land, Texas.

Recently, the city has been criticized for a newly erected statue in the town square’s public plaza—of two teen girls taking a selfie.

So is the city of Sugar Land expecting us to take pictures with that statue of 2 girls taking a selfie? I'm embarrassed for everyone.

The new statue in sugar land town center of 2 girls taking a selfie makes me really sad. If you're going to put one, make it meaningful.

What's my hometown like? Well they just erected a statue of 2 girls taking a selfie next to city hall sooooooo… pic.twitter.com/k4J2vQRZun

However, some people are doing what the statue was probably intended for: taking selfies with it. Which honestly sounds like more fun than making a big fuss over its existence.

We stand in solidarity with the people of Sugar Land who just want to take a selfie with a statue that celebrates the fun of taking a selfie. Plus, just wait until the same people that complained about the piece finally give in and take a selfie of their own.

THERE'S A SELFIE STATUE IN MY TOWN. pic.twitter.com/hEV0MLM04L

The selfie statue will triumph over all.