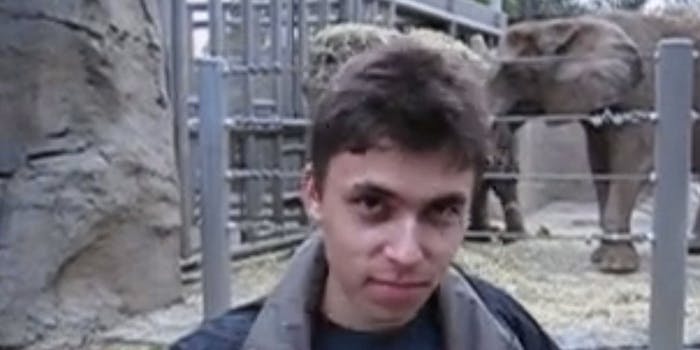 A decade later, we've yet to top the subtle genius of 'Me at the Zoo.'

Do you remember where you were the day YouTube launched? I don’t. I was a freshman in college ten years ago today—on April 23, 2005—but there was no exact moment when YouTube entered my life. It wasn’t there, and then it was everywhere, as if we had been using it the whole time.

“Me at the Zoo” was the first video ever uploaded to the site, and it came from co-founder Jawed Karim. It appeared user name “jawed,” and it seems to be the only video Karim ever uploaded—at least under that name.

The brilliance… is palpable. We open on a young Karim at the San Diego Zoo. He has a look of distrust in his eyes, or perhaps one of sarcasm, as if he is only indulging his audience with the pachydermic expertise to come.

“All right, so here we are in front of the elephants,” Karim begins. He cracks a smile, then looks back. Gesturing with his right hand, he explains that the “cool thing about these guys is they have really, really, really long, um”—he hesitates nervously before the final word—“trunks.”

This “um” reveals an inner shyness, in sharp contrasting to the bravado of his playful opening glance. At that moment, he seems truly overwhelmed by the length of the elephant trunks. A child screams. A goat bleats. Our leading man declares the trunks “cool” before turning around for one last look at the majestic beasts—as if to make sure they’re still there.

Ten years later, YouTube has become, well, YouTube. It’s where all the videos are; it has its own celebrities. Karim’s video even inspired a documentary about life as a “YouTube sensation” in a digital age when each and every thought, every single experience is made to be shared and watched. Because we all just want someone to notice. We just want someone to agree with us: The elephants are pretty cool.