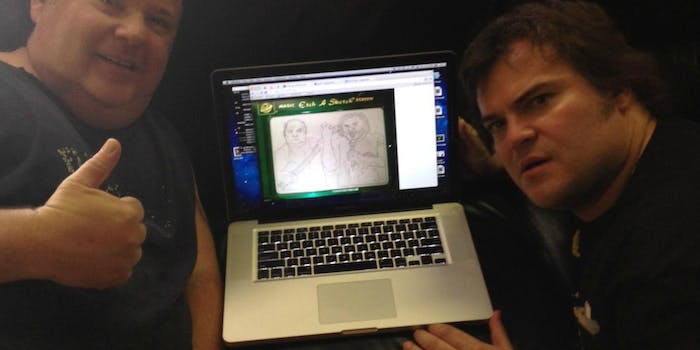 Here are the highlights from the week in Reddit live-interview sessions.

It was a week of rehashing at Reddit’s r/IAmA section this week.

Louis C.K., who seems to still be figuring out how Reddit works, gave a number of brutally honest answers. Take the redditor who claimed to have good material but is too scared to try it at a club. In response, the comedian wrote, “How do you know they’re really good jokes? They’re probably not very good.”

On the other hand, Tenacious D got creative, recording verbal answers and posting them as Soundcloud files. Their thread barely edged out Louis CK’s for most popular this week.

What’s the craziest thing that’s happened during a concert? (galagos)

We caused an earthquake in New Zealand during Tribute, Google it bitch

Why do you guys rock so hard?! and why do I always get a boner when I listen to you. Please help? (manwizzle)

JB: Our music is basically like a vagina to your ears. That explains the pleasure and the boners. Crank it, for full release.

A genuine don’t-know-me-in-day-to-day-life fan? Yes. They were so nervous they ejaculated twice before we even got to any of my holes and I gave up. He was super cute though.

4) IAMA Stuntwoman for over 35 years, currently being denied health coverage by Hollywood. AMA

How do “A-List” actors generally regard stunt people?
Are you looked down upon for not being in the limelight, or are you respected because you’re willing to do the dirty work that the actors can’t. Or are you just another part of the crew?
And how much care is taken when deciding which stunt person should represent which actor? Is it a ballpark: same gender same hair colour, or is a lot of thought gone into these decisions. (MadWalrus)

Some Actors are proud to talk about their stunt doubles, while others will claim that they do all their own stunts…which is not true most of the time….just look at the credits at the end of a movie or look up the credits on IMDB on the movie and you just might find who the Actor’s stunt double really is.
Interesting, second paragraph, I would say we are just part of the crew. We are Member of the same Actors Union but a lot of the time we work more with special effects and camera getting the shot done correctly.
Third paragraph, that all depends on the stunt coordinator. Some are very careful in who they hire to double an Actor, while others will hire another a stunt coordinator so that they too will get a job in return. Men sometimes still double women (all in the name of “safety”) and worst of all there are still times that they will paint themselves “Black” and “steal” those jobs as well.

5) I’m Frank Warren, founder of PostSecret, caretaker of more than half a million secrets from around the world. AMA

Have you come across secrets that you just wish you know who sent it and the story behind it? (Helen0rz)

Yes…”Everyone who knew me before 9-11 believes I’m dead.”

6) IAmA 91 Year old WWII veteran. At 20 years of age I directed a merchant ship to avoid torpedoes+bombs I was then rewarded with ten shillings AMA

Were you ever close to dying during your service? (Pierre77)

Oh yeah, Several times actually especially at Tobruk when two bombs we dropped by the Germans on our stern, I was on the bridge. I then (was forced) had to go swimming

7) IAmA 24yo electrical engineer with magnets implanted in my fingertips. AMA.

How do they work? (lawnofthemonth)

The magnets move with any moving magnetic field. So if I get close enough to a strong magnetic field, they start to vibrate in my fingertips. I can feel those vibrations. It is a similar feeling to when your fingers tingle after you hit your elbow.