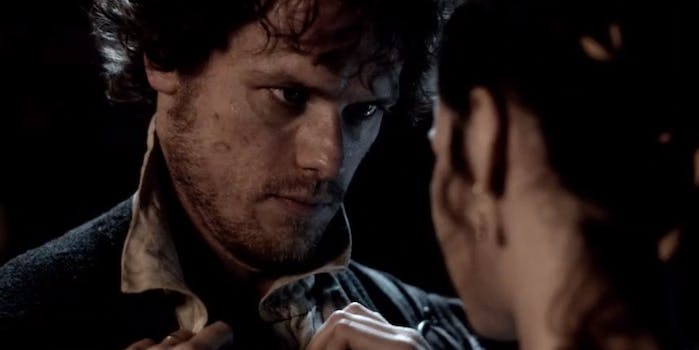 When marketing teams get involved, everything tends to become the dumbest possible version of itself.

“The network is actively trying to court a fandom audience.”

Speaking as a fan, I’m not sure I’ve ever read a more horrifying sentence. I’m paraphrasing from the Daily Dot’s own recent introduction to Starz’s new series, Outlander. As Gavia Baker-Whitelaw points out, there are a lot of reasons to be horrified, Diana Gabaldon’s hypocritical views on fanfiction not least among them.

Speaking as a writer-producer, I understand the need to promote your new show based on something. As a pre-existing book series, Outlander comes with a built-in audience, and it makes sense to build on their passion to grow the audience for the television adaptation.

A large part of my job on Jane Austen adaptations like The Lizzie Bennet Diaries and Emma Approved involves designing experiences that will appeal to old and new fans alike: combining Austenian tidbits with the specific culture and unique touches of our adaptation. But that’s storytelling—my main goal isn’t to sell you something.

When marketing teams get involved, though, everything tends to become the dumbest possible version of itself. That includes, if you ask me, the version of “fandom” that Starz is trying to generate seemingly out of thin air around their upcoming premiere.

“A community has come together,” the show’s website tells you. A button encourages you to “VISIT NOW.” When you click through, though, there’s no sign of the years of dedicated fan enthusiasm for the book series being adapted.

There are, from what I can tell, an endless stream of promotional “behind the scenes” tweets from people involved in the show; a sprinkling of fan tweets hashtagged #Outlander; endless photos from and blog posts about press events; and one big square in the feed helpfully headlined “ACTIVITY,” offering a Buzzfeed-style “Time Period Quiz” that will tell you “where in time the stones” would take you. (That’s a time travel thing from the show, I guess. What the site really needs is a primer to explain all this.)

I’ll admit that some of the material provided is pretty cool. There are lessons on how to “Speak Outlander,” whatever that means. (It’s Gaelic. They mean Gaelic.) There’s an “Apothecary Cabinet,” where you can explore herbs and tinctures of the 18th century. Those appeal to the linguistics and history nerd in me, and I’m sure they satisfy an audience already engaged with the books for those reasons.

But there’s little sense of community here. Nothing offered at outlandercommunity.com allows fans to talk to each other, to share their enthusiasm or their fanworks, or to provide feedback.

And then there’s the “downloadable pocket Jamie.” I wish that were a joke.

Fandom loves characters, it’s true. But we love them because they feel real—they feel like people. We ache for them and cheer for them. We imagine them in offscreen moments, going about ordinary days, talking to each other beyond each week’s allotted 42 minutes.

But Starz is suggesting that we (will) value Jamie only as a hot romance novel stereotype—a cardboard cut-out fetish object.

Marketers courting fandom isn’t new (see, for example, any number of official network/show tumblrs, Teen Wolf’s fanfiction contest, and the recent mtvU Fandom Awards), but this is one of the first times I’ve seen it happen before a show’s airdate. And I fear it might become another stunning example of networks being completely oblivious to the actual feelings of fandom at large.

Attempts like these frequently backfire with their intended audience (#asksupernatural). Fans can sniff out the fakeness of a marketing team who only half-understands what fandom is and does. When fandom values don’t line up with what the network wants to sell: watch out.

The halcyon days of the intact fourth wall are over. And we’ve come a long way from Aaron Sorkin making fun of us on network television. Now networks themselves try to appeal to us, corral us, and even pit us against each other in pointless battles of link-baity glory. But is this new world of fandom-as-marketing-strategy so great?

Sure, we are safer than we’ve ever been from legal threats to fanfiction under copyright law (sorry, Diana, what we do isn’t as illegal as you thought). We (and our dollars) are being taken more seriously than ever before. We’re the new hot commodity.

But fandoms are also delicate ecosystems. You can’t force them into existence, any more than you can expect them not to turn on you. Starz’s clumsy attempts at marketing to a fandom audience are a great example: their strategy hasn’t backfired (yet), but it’s embarrassing enough as it is.

If your show tells a good story, fandom will come. If your show gives fans something to be excited about it, they will gather. They will laugh, they will cry, they will write fanfic and create fanart and break Tumblr’s post limits talking about it.

Creating a fake “community” out of shallow bits and bobs isn’t the way to do it. Tell us the story. Sell us on that. Let us found our fandoms naturally, and then come find us.

We’ll be there. And we’ll be a lot more receptive to your approach.

Alexandra Edwards is a writer, producer, and Emmy Award™-winning transmedia storyteller. She is best known for her work on the webseries The Lizzie Bennet Diaries and Emma Approved. But she is also a fanfic-writing, fanmix-making member of fandom—42,000 words into her most recent fanfic, and not at all ashamed of it.