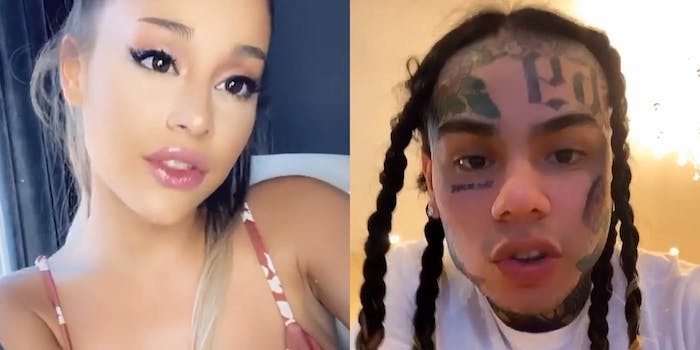 Ariana Grande, Justin Bieber deny cheating to get to No. 1 Billboard song

Rapper Tekashi69 said the singers bought their own song to get to No. 1.

Ariana Grande and Justin Bieber’s new single “Stuck With U” snagged a No. 1 spot on the Billboard charts, but apparently not everyone is happy with the duo’s success.

According to TMZ, Tekashi69 is outraged that his track “GOOBA” has been eclipsed by Grande and Bieber’s collaboration, and he took to Instagram to blow off steam, accusing Billboard of foul play.

“CAUGHT CHEATING,” the rapper wrote in an all-caps Instagram post published along with a video. “YOU’RE A LIE AND CORRUPT. YOU GOT CAUGHT CHEATING AND THE WORLD WILL KNOW.”

In the video, the recently freed rapper accused Grande of purchasing units of the track, so it would climb on the charts. He alleges an investigation revealed a few credit cards were used to buy a majority of the units.

“You can buy number ones on Billboard,” Tekashi69 argued. “They bought 30 thousand units with six credit cards.”

The rapper then pulls out his phone to show the camera his receipts to try and prove the whole chart system is rigged.

Apparently the disqualified streams made it impossible for his track to beat out Grande and Bieber’s song for the number one spot.

Grande shot back at the rapper’s attempt to discredit her success in a lengthy Instagram post, in which she also thanked her fans for their support.

“OUR fans bought this song (never more than four copies each, AS THE RULES STATE),” Grande wrote. “Sales count for more than streams. U can not discredit this as hard as u try.”

Grande also pointed out the fact that Tekashi69 only addressed her, not Bieber, for some unknown reason, and shared a piece of advice for the rapper: Be humble!

“To anybody that is displeased with their placement on the chart this week or who is spending their time racking their brain thinking of as many ways as they can to discredit hardworking women (and only the women for some reason…..), i ask u to take a moment to humble yourself,” she continued.

Bieber also jumped into the beef and took a stand with Grande to defend their song’s success.

“60,000 units came because we don’t disclose our numbers until end of week. That’s called strategy.” Bieber said in an Instagram story. “This is my song with Ariana Grande and I’m honored to work with her to help raise money for a great cause. If you gonna say her name make sure you say mine because it’s our song.”

Tekashi69 decided to fire back and uploaded yet another video to Instagram targeting Grande and accusing her of being privileged.

“I speak for the millions of kids who aren’t as fortunate as you,” he captioned the video. “YOU ARE VERY TALENTED AND BEAUTIFUL GOD BLESS YOU. But you will NEVER UNDERSTAND MY PAIN.”