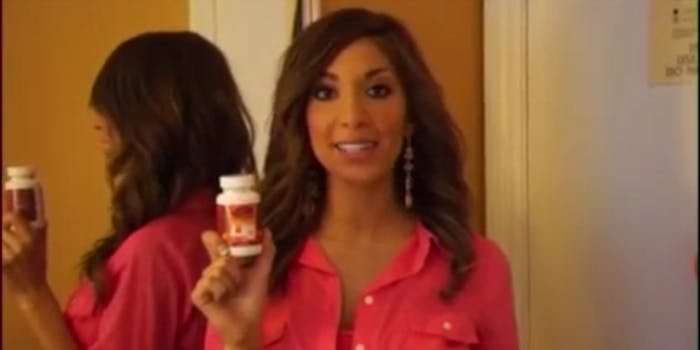 Act now, and you can buy her a sexy French maid costume!

Farrah Abraham is perhaps best known for her time on MTV’s Teen Mom. Beyond that, she’s attempted to extend her 15 minutes of fame via a sex tape, which “leaked” onto the Internet earlier this summer. It’s called Farrah Superstar: Backdoor Teen Mom. She’s also been endorsing a shady diet supplement containing “raspberry ketones.” You know, normal mom stuff.

In the fast-paced world of pornography and diet pills, Abraham has apparently not found a suitor who will lavish her with the appropriate material things, so she’s started her own Amazon Wish List, which she tweeted out to her followers yesterday. Right this minute, you can buy Abraham a $900 Sherri Hill dress! (And gifts for her daughter, Sophia, too.)

Besides her selection of dresses ranging from $200 to $900, Abraham is also wishing for an $800 Pottery Barn coffee table, a $1,500 French bookcase, a “Harem Hottie” Halloween costume, a red crochet monokini, silver sequin booty shorts, and a $50 “princess” dress for her daughter.

Right now you’re probably thinking: Is this woman for real? Yes! Don’t let this deal pass you by! If you act now, she might throw in 1,500 copies of Backdoor Teen Mom no one bought.

H/T Oh No They Didn’t! | Screengrab via Raspberry Ketone/YouTube