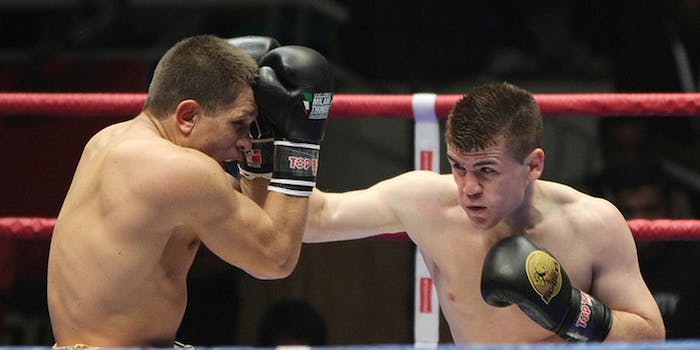 Tough teen pauses fistfight so he can text his mom

Kid's never gonna live this down.

To live by the warrior’s code, according to the Dropkick Murphys, “You fight for your life because the fighter never quits.” Unless, of course, a warrior needs to take a time-out to text their mom.

In what can only be the latest bout between the Crips and Bloods, two pugnacious youths battle it out, flanked by raucous allies. The lanky fellows land few punches before Team Blue calls time (at 0:37). “I’m not pussyin’,” he declares, letting Team Red know that the fight’s not over. He needs to get in touch his mother, who is planning on picking up the brave warrior.

“I’m not kidding, I gotta go. I’m not fucking with you. I’m gonna get in big trouble,” he pleads after the first takedown. But the crowd remains hungry for blood, and is eager to declare a winner. “We’ll have to do this again,” Blue promises, but no one is buying his story. “You know how my mom is!” He assures everyone there’s nowhere he’d rather be than in the ring.

Team Red sees this as a victory by forfeiture; Team Blue by cunning. Turns out, according to the true code of the warrior, Mom is always a worthy excuse to postpone a battle—just not a very cool one.