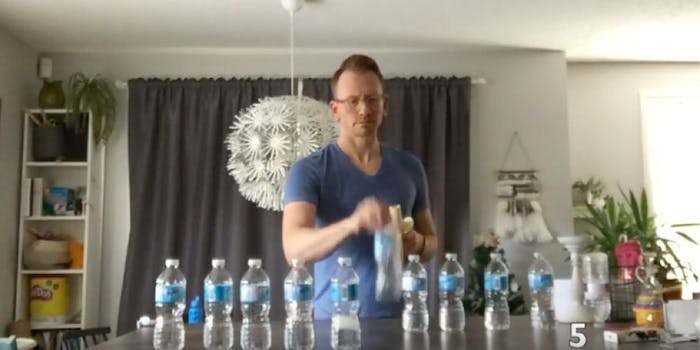 He waited six months to hit them with these tricks.

Back in December, schoolteacher Nathan Marshall banned water bottle flipping—which you may remember as the teen craze that preceded fidget spinners–from his sixth-grade class. The very next day, he began training to become a bottle-flipping ninja, and started making an astounding flip video that would blow the kids’ minds. At the end of the school year, he finally released it.

“He showed them and they lost it,” reports artesandesarts, a friend of Mr. Marshall’s who posted the video on Reddit.

In the four-minute video, Marshall shows the kids that bottle flipping isn’t really that impressive—it’s just physics. He nails single flips into shoes, onto tables and counters, and into the toilet tank, then starts landing double flips and building stacks. He even lands a bottle on a basketball backboard in the gym, and hits a three-pointer for good measure. Kobe!

Illusionist Derren Brown once guaranteed he could get heads on 10 coin flips in a row, and he delivered… by flipping for more than nine hours, then showing only the final, successful take. The same principle could be at work in Mr. Marshall’s video. After all, he had more than six months to work on those no-look bottle flips, and he only showed the best four minutes of stunts.

On the other hand, bottle tricks are more skill-based than a coin flip, and Mr. Marshall had months to practice… maybe he just got really, really good.

Either way, his hard work had the desired effect. His class—and the internet—are flipping their lids over this video.