One of the most uplifting tropes of Internet video is a crowd of people losing their damn minds over some minor feat of physical skill. The defining clips in the genre involve a kid nailing a simple diabolo toss and a teen busting out some sick surprise moves in a dance-off.

Today, we add another video to the canon: the water bottle flip heard around the world.

A bit of backstory on what led up to this obvious and overwhelming triumph: The flipper, Mike Senatore, is a senior graduating from Ardrey Kell High School in Charlotte, North Carolina. And on his way out, he decided to participate in the class talent show, alongside dozes of mundane acts like “animal impersonation” and “song/dance.”

Uproxx found the list of performers on Twitter and confirmed that Senatore is the only one in the class whose talent is “battle flipping.” 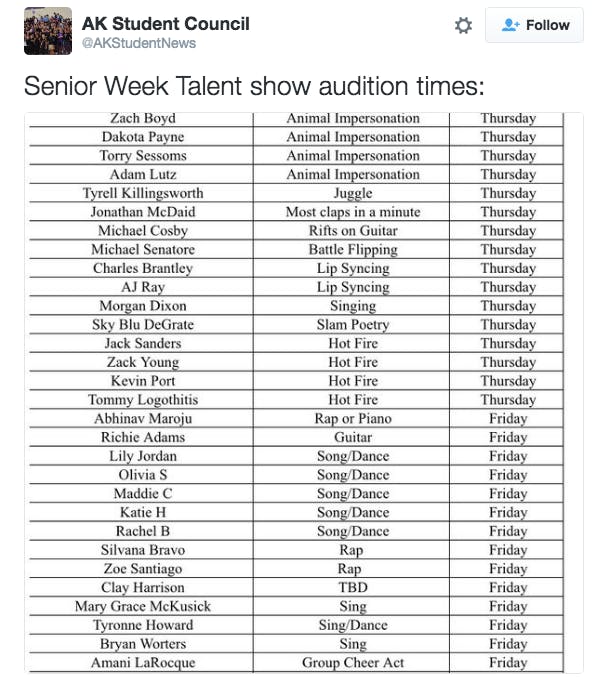 As he steps up for the flip, you can hear an audience member speculating about whether he can pull it off—and then, in one deft move, he does. He sticks it. The crowd erupts in a cheer that overtook not only the Ardrey Kell auditorium, but the whole dang Internet.

The video got tens of thousands of likes on Twitter, where it was posted by Senatore’s friend, Wes, and producers from local TV and Good Morning America are clamoring to run it.

@Mike_Senatore FLIPPED A WATER BOTTLE FOR OUR TALENT SHOW AND ITS THE MOST LIT THING IVER EVER EXPERIENCED pic.twitter.com/2G0GTiy2O4

In these troubled times, everyone’s looking for a hero to believe in, and Senatore just flipped his water bottle into that vacuum with exquisite precision.

He’s feeling himself on Twitter a bit, but can you honestly blame him? That flip ruled.

The flip heard round the world