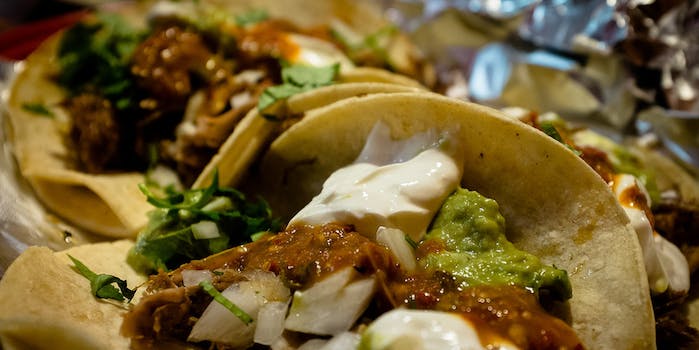 5 reasons the taco emoji is taking over the world

The emoji taco matters more than you think.

If there’s one thing the Internet has been consistently demanding since the emoji wave hit the United States, it’s this: A taco emoji. Petitions have been written, Facebook pages have been started, and pretty much everyone who has used an emoji ever has bemoaned the lack of a taco, usually late at night, when the longing for tacos in both physical and metaphorical form strikes so many of us.

Good news for taco lovers: It’s finally time for the taco emoji to get its day, and, as a bonus, we might be getting a burrito, too.

But this is about more than just a goofy little graphic to text your friends after a night of drinking, or something to add to a tweet in an exuberant expression of food love. It’s about what’s happening in American food culture, and how our mutual love of food is intersecting with the Internet.

It’s also a reflection of how an expressive system developed for the Japanese market has gone worldwide; emoji seem to have sprung from obscurity into the front lines in the U.S., but in Japan, people have been using them since the late 1990s. We can actually blame Google for bringing emoji to U.S. soil as part of an expansion into Japanese markets in 2007. Or thank Google, depending on how much you enjoy having pictures of poop in your Twitter feed. The addition of the taco to the character set marks an important cultural sea change.

Given that emoji originated in Japan, it’s perhaps not that surprising to see traditional Japanese foods heavily weighted in the food representation within the emoji character set. But over time, pizza, hamburgers, and even cake have won out. Why not the taco, a quintessential expression of American culture, and a beloved food from coast to coast?

After endless lobbying, crying, and petitioning, the good news is that the taco is finally on the latest list of considerations for inclusion in the emoji standard. Victory for one of the most humble, yet important foods in American culture. So why, exactly, is the taco such a critical addition to the emoji library?

1) Expanding the emoji character set represents the increasing ubiquity and global adoption of a once niche product.

Japanese social phenomena rarely tread beyond the borders of Japan, and when they do, they’re either objects of creepy Western objectification and fascination (harajuku girls, Lolitas) or they’re peculiar niche products (Tamagotchis) that experience a dizzying moment in Western culture before vanishing again. Emoji, however, appear to be standing the test of time, something illustrated by the fact that they have been more and more widely adopted across social and cultural groups in the U.S.

Expanding the set of available characters suggests that emoji are here to stay, and that the library of options will only expand in the coming years. Notably, the new list of proposed characters also includes religious expansions, like a mosque. The ability to convey more complex political and social aspects of identity highlights the role of emoji as communicators in the modern world.

This also illustrates a growing interest in emoji diversification, an issue that’s come up this year with a proposal to add a wider range of skin tones to the existing set. Charles Pulliam-Moore at NPR notes the importance of the move:

Bernie Hogan, a research fellow at the Oxford Internet Institute, says that emoji act as emotional punctuation in a world increasingly tied to digital, text-based interactions. Racially coded emoji, he explained, could function as a symbol of cultural kinship, broadening the scope of digital communities.

Taco fans know that this simple assembly of ingredients wrapped in a wheat or corn tortilla is more than just something delicious to drizzle with hot salsa. It’s also a culinary phenomenon, for better and for worse. The taco has been warmly embraced by the hipster population, with its love for all things food truck, hole-in-the-wall restaurants, and Mission District. It also continues to be a cheap yet tasty lunch staple for people across California, the Southwest, and many parts of the South. It’s a cinch to assemble after a long day of work, or something to kick back with on Taco Tuesdays at the pub.

While tacos may not be a “traditional” American food alongside hamburgers and pizza (both available as emoji), they are becoming an indisputable part of the American lifestyle. While it might seem odd to think of a food being validated through a single keyboard character, the decision to embrace the taco as a possible emoji is an expression of how mainstream it’s become.

Not everyone is as excited about the taco situation. “Though some might argue that a hot dog emoji is much more exciting, [there] could also be a case made for a burrito being the emoji that’s needed most,” remarks Jenna Mullins at E!.“That’s a debate we would love to see happen, even though we know it’s possible friendships and families could be torn apart over tacos vs. hot dogs vs. burritos.”

3) The inclusion of the taco is a demonstration of the growing linguistic complexities of emoji.

Emoji are no longer simply a cute assortment of characters. They’re also a linguistic phenomenon; it’s possible to write complex sentences entirely in emoji, and many enterprising emoji fans have used the tiny characters to write up book synopses, social commentaries, and more; there’s even an emoji messaging app that relies entirely on these little characters for communication. The adoption of emoji as a mode of legitimate communication marks an interesting turnaround point in how people interact with each other.

Much like textspeak, emoji are sometimes derided, but this is a mistake. They aren’t just a flash in the pan or a passing phenomenon, nor do they represent the downfall of English and the horrors of kids these days mutilating what’s left of our linguistic dignity. Instead, they’re a legitimate linguistic outbranching of language, and that’s why the introduction of new culinary concepts is important. Notably, the current character set doesn’t include any traditional Mexican, or Mexican-American, foods. That’s going to change with the burrito and the taco.

At The New Inquiry, Luke Stark and Kate Crawford highlight the social and linguistic importance of emoji:

Yet emoji have a rich and complex history behind the campy shtick: From the rise of the smiley in the second half of the 20th century, emoji emerged out of corporate strategies, copyright claims, and standards disputes to become a ubiquitous digital shorthand. And in their own, highly compressed lexicon, emoji are trying to tell us something about the nature of feelings, of labor, and the new horizons of capitalism. They are the signs of our times.

4) Shifts to the character set illustrate responsiveness in the Unicode Consortium.

The taco has been among the most consistently requested emoji in recent years, perhaps indicating how deep our taco love goes. While the Unicode Consortium may have tried, ultimately, they knew that resistance would be futile; and the fact that other popular requests, such as the burrito and popping bottle, are also on the proposed list, shows that the organization is interested in meeting the requests of avid emoji fans. Or, perhaps, the needs, depending on how one views these matters.

For the Internets, a world filled with “feels,” endless Change.org petitions, and cat memes, it can sometimes feel as though our collective obsessions never quite punch through to those in charge of the very way we communicate with each other. In lieu of a taco emoji, we’ve resorted to sending each other pictures, typing (taco) to convey the empty hole in our lives, using the specialized Taco Text service, or just complaining that the taco emoji doesn’t exist. The fact that the Unicode Consortium is considering the taco emoji is no petty victory: It’s an illustration of the power of collective Internet organization.

Notably, in the Unicode Consortium announcement, a mockup of the taco emoji was the sole illustrated used to demonstrate the proposed additions to the character set; perhaps someone among those in power has been secretly rooting for the taco team.

I mean seriously. We’ve been screaming for a taco emoji for years for a reason, and it’s not just because the taco is a quintessential American food that is being adopted across a growing proportion of the United States. It’s also not simply because tacos are delicious. It’s because tacos are a pop culture phenomenon, and at their most basic, emoji are a critical expression of pop culture. Pop culture with tacos would be a grim place indeed, and I’m not just talking about all the Taco Bell jokes we’d be missing out on.

But before you get your taco hand ready, be warned: These are only proposed emoji, and have yet to be finalized. Even if they are, Google, Apple, and the like still need to add it to their emoji fonts, or it won’t be supported. So if you feel like sending feedback, be sure to use the reporting form.

And when you’re done, go out and get yourself some tacos al pastor. You earned it.

Photo via rpavitch/Flickr (CC BY 2.0)