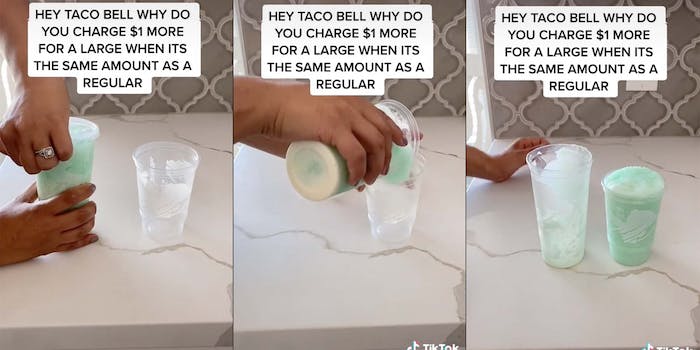 ‘I feel cheated’: Viral TikTok allegedly exposes that regular and large drinks at Taco Bell are the same

'Why do you charge $1 more for a large when it's the same amount as a regular?'

In a viral video posted to TikTok, a user pours the contents of a large Baja Blast Freeze into a regular-sized cup, and it shows that the volumes of the two cups are strikingly similar.

The video has been viewed over 6.3 million times since being posted to the platform on July 6 by Sara Rich (@sararich63). “Why do you charge $1 more for a large when it’s the same amount as a regular,” Rich questions, using the text-to-speech effect.

However, Taco Bell’s website lists a 20 cent difference. Rich told the Daily Dot that when she posted the video, she wasn’t aware of the actual price difference between the sizes.

“I feel cheated,” writes Rich in the caption of the video.

TikTok users in the comment section of the video are divided.

“It’s literally over the rim on the smaller cup. If you put the lid on it’ll spill,” commented @that.bimbo.raven.

“It didn’t over flow. It just went to the brim of the cup. Y’all know what they meant in the video,” commented @halie.ghent.

Many identify themselves as Taco Bell employees in comments as well.

“The simple answer is because we need to leave space at the top of the cup to add the cap. Believe me it will overflow, I’ve made that mistake multiple times,” wrote @leah.malik, who claimed they work at Taco Bell.

Rich told the Daily Dot that she plans to buy regular-sized drinks at Taco Bell from now on.

The Daily Dot has reached out to Taco Bell.