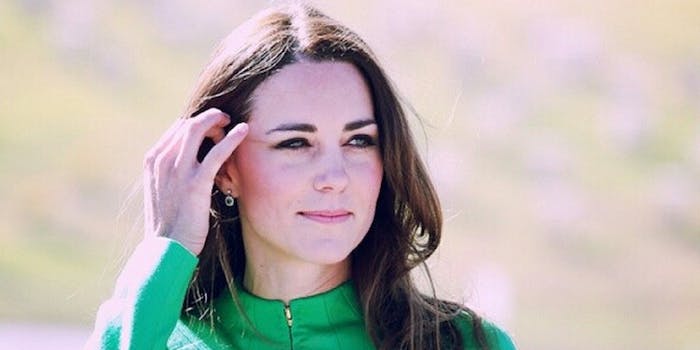 Why did a German tabloid publish photos of Kate Middleton’s butt?

Let the scandal and outrage ensue.

On Wednesday, pictures of Kate Middleton’s bare royal rump popped up on the website for Bild, a tabloid magazine in Germany. According to the snapper of the fanny photo, it was taken accidently when a gust of wind blew the princess’s skirt up during a trip to Australia, revealing a panty-less bottom. Let the scandal and outrage ensue.

But perhaps more interesting than the “appropriateness” of Kate’s lack of underwear or the “civility” of the Germans for posting the pictures, let’s talk about why on God’s great booty-filled earth, a tabloid would ever print an accidental bare bottom shot of anyone who was not willing posing for a nudie photo and consenting for its publication. (We will ignore for the time being the fact that the amateur photographer has vowed to donate the money she received to charity in order to clear her own fucked-up conscience.)

The tabloid printed the picture, because like many residents of our global village, it believes the world has a right to see a woman’s body. This was the same logic used with the infamous bad girls of Hollywood crotch shots. (See: Britney Spears, Paris Hilton, et al.) American tabloids have gone to extreme lengths to snap a pic of other celebs pantied or un-pantied crotches usually when these ladies are attempting to exit a car in heels.

Because posting a picture of a woman’s private body is not enough—as a society we then feel we have the right to judge and comment on that body: it is too thin, too thick, too hairless, too hairy, too covered, too bare, too muscular, too flabby. Commenters seem to separate the photographed body from the actual human to which being it belongs. They forget that Kate Middleton’s butt actually belongs to, well, Kate Middleton, a human being who is more than her fabulous flowy dresses and toned ass.

These opinions of women’s bodies shouldn’t matter, but the pathetic fact is they do. We are teaching our women that how others view their bodies do matter—and matter more than what they themselves feel about their bodies and their personhoods. Their personal agency and privacy are irrelevant.

It is not just that these pictures are horrifying by suggesting that these women’s butts don’t belong to themselves, but are public ownership, but also because objectification is damaging to women’s self-esteem and mental well-being. Beginning in the late nineties, academics have found links between exposure to objectification and higher rates of eating disorders and depression. Objectification leads to phenomema like “body monitoring,” where women constantly check their position of their body to make sure they look good. (See: the Tummy Tuck or the Chin Out and Down trick.) This constant shifting leaves women out of touch with their internal feelings, leading to increased anxiety.

Even criticism of the photos has often missed the point. Upon re-posting the pictures, the Sydney Daily Telegraph’s Annette Sharp insisted that it was up to the princess to make sure her “modesty” was in check. Critics suggested that Kate should have had a weighted dress hem or at least some more fool-proof undergarments. But here we can see how she’s being set up to fail no matter what. If the photo had shown Middleton wearing granny panties, she would be the unsexy princess whose bloomers would be making the judgmental rounds. As a woman, there’s no way to win this game.

It is not Kate Middleton’s (or any woman’s) duty to protect an imaginary idea of modesty. Women do not need to conform to some ridiculous idea about what is acceptable just to be blamed if they cross some imaginary line.

The issue is, indeed, about common decency, but not in the way Sharp suggests. The reason these photos shouldn’t have been published has nothing to do with Kate Middleton being royalty, a mother, or a “respectable” lady. These photos should not have been published because Kate Middleton is a human being who did not consent to her body being photographed, publicized or critiqued.

She has the right to her own body, to wear or not wear whatever she wants under her dresses, to show her body to whom she wants to when she wants to without fear of the lurking lens of public scorn.