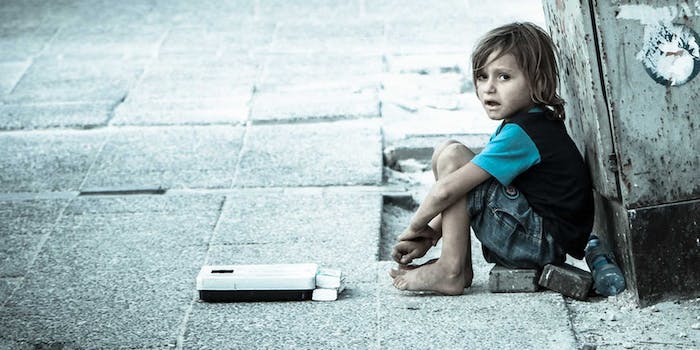 Why you should care about Syrian refugees this Thanksgiving

Thanksgiving is a good time to think about what the Syrian refugees are facing.

It was the image that shocked the world.

In September, photos of a 3-year-old that washed ashore on the coast of Turkey symbolized the desperate plight of Syrian refugees and on Twitter, hearts cried out—expressing sorrow and anguish for a life ended too soon. But that social media empathy was short-lived. The months since have illustrated the shameful limits of our capacity for compassion, whether that’s on the Internet or in real life. Over 30 U.S. governors—from states as wide-ranging as Alabama, New Hampshire and Illinois—have attempted to block the entry of Syrian refugees into the country.

If Sen. Sherrod Brown (R-Ohio) has argued that “armed white men” are the biggest threats to national security, it’s time to stop scapegoating the refugees and recognize their struggles as our own. After all, the Syrians’ story should be strikingly familiar to Americans. Our country was founded by a group of refugees escaping religious oppression. Instead of focusing on the fears that divide us, Thanksgiving is a time of year when we should be highlighting our common ground. If our immigration policy too often fails those who need our help most, this is our opportunity to finally get it right.

In an address from the White House on Thursday morning, President Barack Obama reminded us that “welcoming others is part of ‘what it means to be an American.’”

“Nearly four centuries after the Mayflower set sail, the world is still full of pilgrims—men and women who want nothing more than the chance for a safer, better future for themselves and their families,” Obama said.

After the Pilgrims landed at Plymouth Rock in 1620, their arrival in America would herald the influx of numerous other groups since—like Jews fleeing the Holocaust or Africans escaping countries ravaged by poverty and violence. My ancestors included the victims of the Irish Potato Famine and Protestant Huguenots subjected to persecution in Catholic France.

But of course, that’s a gauzy interpretation of America’s immigration history. Groups like the Irish and the Jews were widely discriminated against in the United States. “No Irish Need Apply” ads would commonly restrict Irish-Americans from responding to job postings in the newspaper, and before World War II commenced, a vast majority of Americans (67.4 percent) thought the United States should keep European Jews out. Just five percent thought it was OK to raise federal immigration quotas to bring Jewish refugees to the U.S. One of those barred from entry was Anne Frank herself.

As the Washington Post’s Maria Cristina Garcia pointed out, American ambivalence to asylum seekers has always been the case. While the passage of the Displaced Persons Act brought 200,000 refugees to the U.S., the bill “discriminated against Jewish and Catholic refugees, and Truman was tempted to veto it because it was ‘wholly inconsistent with the American sense of justice.’” It also took Congress until 1948—three years after the end of World War II—to get the bill passed.

After the end of the bloody Vietnam War, a decimated Southeast Asia had millions of its own children and families stuck in horrific states of desperation. But as Garcia writes, “news stories about the high casualty rates of Vietnamese boat people stranded at sea and about squalid refugee camps in Thailand did little to change public opinion.” Only 32 percent of those surveyed in 1979 felt it was America’s place to extend a helping hand to displaced populations, as Americans widely felt they were “politically suspect, self-interested migrants who came to mooch off the welfare system.”

These descriptions should sound eerily familiar. According to statistics from the European Union, 9 million Syrians have had to leave their homes and communities since civil war broke out in the country 4 years ago. Many of those are living in crowded camps in Lebanon or Turkey. Turkey now houses 1.9 million refugees in environments that are barely livable—described by the Week’s Sarah Eberspacher and Lauren Hansen as “temporary rooms, mud-floored tents, and makeshift shelters they call home.” The refugees are struggling to make a life in some of the most dire conditions in the world.

But instead of recognizing the absurd difficulty of these people’s situations, many social media users have shamed them for using cellphones, while many of our government leaders insist they are a terrorist threat. The idea is that by bringing more Muslim immigrants to the U.S., America risks another attack on domestic soil, despite the fact that there’s almost no link between the immigration rate and terrorism. In Europe, the migration rate has has reached World War II levels, according to the Economist, but the number of terrorist attacks has actually decreased since the late 1970s. In addition, every single one of those identified as involved in the Paris attack was born in the European Union.

If the idea that America is a refuge for the “world’s huddled masses,” as Garcia puts it, has always been something of a myth, the example of Thanksgiving provides us a way forward. As a folk tale, Thanksgiving isn’t a reflection of the actual relationship between the Pilgrims and Native Americans, one that would be marked by centuries of carnage and conquest. Instead, Thanksgiving envisions an ideal community—of people seeing past cultural difference to break bread. During that winter, the Native Americans selflessly provided shelter to foreign refugees, and without that crucial aid, none of us would be here.

This Thanksgiving, that gesture is one we should all strive to emulate.

Nico Lang is a Meryl Streep enthusiast, critic, and essayist. You can read his work on Salon, Rolling Stone, and the Guardian. He’s also the author of The Young People Who Traverse Dimensions and the co-editor of the bestselling BOYSanthology series.