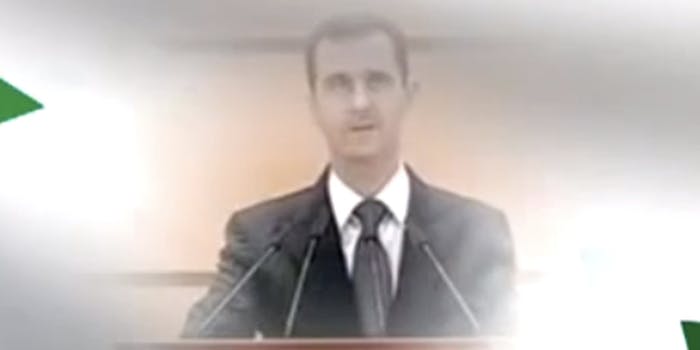 It seems Twitter has sentenced a group of pro-government Syrian hackers to an @ for an @.

The SEA has a habit of this. In recent months, the group has taken control of multiple Twitter accounts belonging to media outlets like the BBC and NPR. The SEA, which openly supports President Bashar Al-Assad’s regime in its civil war against armed revolutionaries, tends to attack news organizations when they offer coverage sympathetic Syrian citizens.

The two biggest CBS accounts compromised, @60Minutes and @48hours, are suspended as of this writing. A third, local affiliate @CBSDenver, has since been reinstated.

According to screengrabs taken before the accounts were suspended, the accounts started churning out tweets that purported to prove “Obama is Shamelessly in Bed with Al-Qaeda.” Slashgear has reported that those tweets linked to sites that were riddled with malware. The SEA claimed responsibility for the tweets on its official page.

Twitter didn’t respond to an inquiry of whether @Official_SEA’s suspension was related to the CBS attack, though the timing is hard to ignore. By the SEA’s admission, this is the fifth time Twitter has suspended one of its accounts. On Sunday it created a new one, @Official_SEA6, which already has 110 followers.