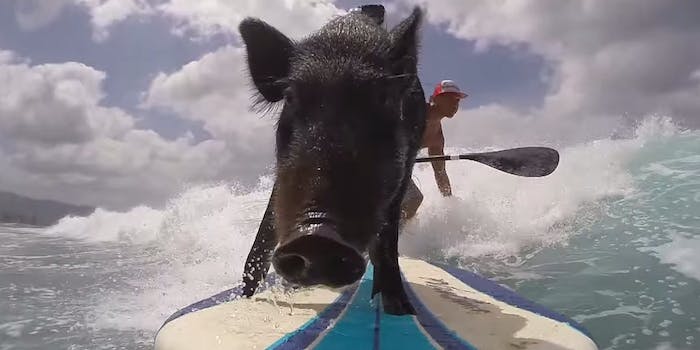 Here’s a GoPro attached to a surfing pig

Look at this surfing pig.

The cameras have ended up in the mouths of crocodiles and foxes, been attached to soaring eagles, and stolen by monkeys. Now, one pig named Kama has taken to the sea with a GoPro.

Yes, Kama is a surfing pig.

But he doesn’t surf alone. Kama and his owner, Kai Holt, hit the beaches of Oahu together, and he’s a natural on the board. Holt says when he was younger, Kama fell in the pool. Surprised that he could swim, he decided he could probably also surf. And that was a great idea because look at this surfing pig.

It’s only a matter of time before Surf Pig (and Surf Pig 2–5) hits the big screen.